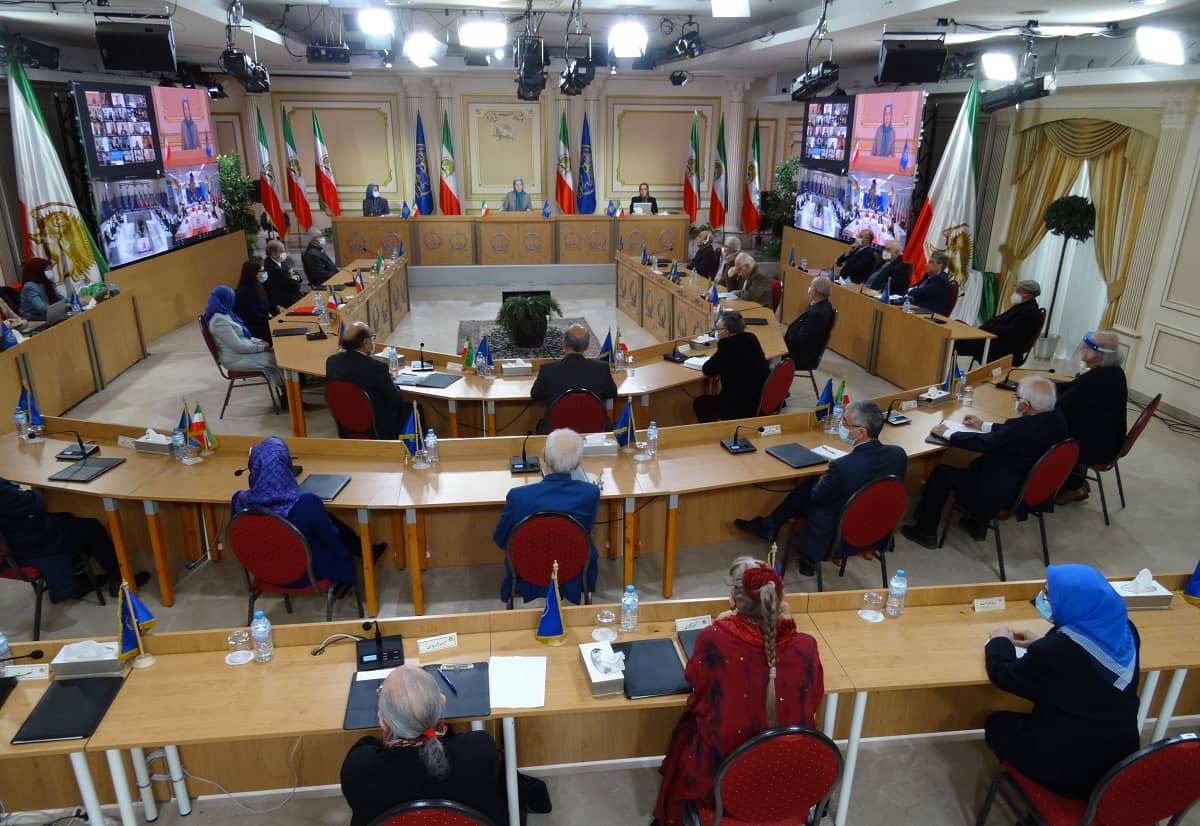 The NCRI is comprised of 25 committees that act as shadow ministries. The committees are responsible for expert research and planning for future Iran.

Maryam Rajavi is the President-elect of the NCRI for the provisional period for transfer of power to the people. Her presidential term will end following ratification of a new constitution in the Constitutional Assembly and the election of a new president for Iran.

The decision making body of the NCRI, is the NCRI’s assembly. In addition to normal meetings, the NCRI holds ‘extraordinary’ meetings as necessary. Additionally, the NCRI secretariat convenes informal weekly discussion meetings on current political issues in which interested members present in Paris can participate. The meetings of the committee chairs takes place as necessary and is chaired by Mrs. Rajavi.

Members of the NCRI reside in various countries including the United States and Europe. Members, in addition to personal and professional engagements, participate in independent political, human rights, cultural, and extra-curricular activities which may not be related to the NCRI. All members are committed to the NCRI’s plans and resolutions.

Some NCRI committees that have other activities aside from research are as follows:

Foreign Affairs Committee: Maintains contact with parliamentarians, political personalities, think tanks, UN bodies, NGOs, and human rights organizations throughout the world, as well as with relevant government officials in Europe, the US, and the Arab world. The committee publishes numerous papers on the situation and new developments in Iran, in English, French, German, Italian, and Arabic languages.

Women’s Committee: Works extensively with Iranian women outside the country and maintains permanent contact with women inside Iran. The Women’s Committee is actively involved with many women’s rights organizations and NGOs and the Iranian diaspora. The committee is a major source of much of the information received from inside Iran with regards to women. Attending UN Human Rights Commission meetings and other international or regional conferences on women’s issues, and engaging in a relentless battle against the Iranian regime’s misogyny are part of the activities of members and associates of the committee.

Political Research Committee: The committee researches the precise state of affairs of the Iranian regime’s internal activities. Study of its internal factions and developments, social unrest, trends, and developments, form part of the tasks of this committee. The committee, in additions to consideration and assessments of various studies and research about Iran, prepares internal reports, using various sources from within the PMOI network inside the country. The results of these studies are discussed at NCRI meetings and used to assess policies and positions.

Security and Anti-Terrorism Committee: The committee’s foremost responsibility is to counter any terrorist and intelligence efforts by the regime to undermine the resistance. This has been one of the main aspects of the committee’s work during the past two decades. During recent years, the Iranian regime has made extensive efforts to infiltrate and undermine the NCRI and the PMOI, by way of spreading disinformation through numerous websites fed by the regime’s Ministry of Intelligence and Security (MOIS). This cyber war is current and ongoing. The committee, in cooperation with the PMOI network inside the country and other NCRI committees, is the source of many revelations about terrorist activities of the Iranian regime in the region, it’s meddling in other countries, particularly Iraq, and revelations about the regime’s MOIS.

Arts and Culture Committee: Since the committee’s inception in the early 1990s, a vast number of Iranian artists have joined the NCRI and many have cooperated to enrich the historical culture and arts of Iran. Work in conjunction with various Iranian societies in holding cultural gatherings, concerts, and artistic programs are some of the committee’s activities. A part of the committee’s tasks involves assessment of the situation of artists and writers under the rule of the mullahs, and also other expert work for future Iran.