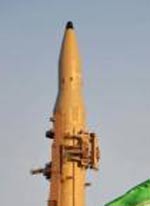 AFP – Defence Minister Ahmad Vahidi announced on Friday that Iran has test fired a surface-to-surface missile, Qiam, a day before it is due to launch its Russian-built first nuclear power plant.

State television showed images of the sand coloured Qiam (Rising) blasting into the air from a desert terrain, amid chants of "Allahu Akbar" (God is greatest).

The words "Ya Mahdi" were written on the side of the missile, referring to Imam Mahdi, one of the 12 imams of Shiite Islam, who disappeared as a boy and whom the faithful believe will return one day to bring redemption to mankind.

Vahidi, whose speech during Friday prayers in Tehran was broadcast on television, did not say when the launch took place nor did he reveal the precise range of the missile.

Fars news agency had in a report earlier this week quoted the minister as saying that Qiam was a short-range missile.

"The missile has new technical aspects and has a unique tactical capacity," he said on Friday, adding that the device was of a "new class."

"Since the surface-to-surface missile has no wings, it has lot of tactical power, which also reduces the chances of it being intercepted," he said.

Iran's ISNA news agency cited Vahidi as saying that Qiam was entirely designed and built domestically and was powered by liquid fuel.

"This missile is capable of hitting the target with high precision," Vahidi said.

On Tuesday, Vahidi had said that Qiam was to be test fired during the annual government week, the period when Tehran touts its achievements in various fields. This year government week begins on Monday.

The third generation Fateh 110 (Conqueror) missile was also to be test fired during this period. Iran has previously paraded a version of Fateh 110 which has a travel range of 150 to 200 kilometres (90 to 125 miles).

Also during government week, the production lines of two missile-carrying speedboats, Seraj (Lamp) and Zolfaqar (named after Shiite Imam Ali's sword) are due to be inaugurated, while a long-range drone, Karar, is expected to be unveiled.

The firing of Qiam comes days after Iran took delivery of four new mini-submarines of the home-produced Ghadir class. Weighing 120 tonnes, the "stealth" submarines are aimed at operations in shallow waters, notably in the Gulf.

Iranian officials regularly boast about Tehran's military capabilities and the latest missile launch coincides with warnings by local officials against any attack on the Islamic republic.

Iran's archfoes the United States and Israel have not ruled out a military strike against Tehran to stop its controversial nuclear programme.

On Saturday, Iran is due to launch its Russian-built first nuclear power plant which eventually aims to generate 1,000 megawatts of electricity. The plant is scheduled to go online after more than three decades of delays.

Iran's atomic chief Ali Akbar Salehi said on Friday that Tehran aims to power the Bushehr plant in future with fuel made domestically for which the Islamic republic would continue its sensitive uranium enrichment programme.

"Enrichment (of uranium) for producing fuel for the Bushehr plant and other plants will continue," Salehi told state news agency IRNA. Currently, Russia has supplied the fuel for the plant.

Salehi said the contract with Russia does not stipulate that Tehran must always buy fuel from Moscow, as the "memorandum of understanding says they will meet our demand if we request" it.

"The Bushehr plant has a lifespan of 60 years and we plan to use it for 40 years. Suppose we buy fuel for 10 years from Russia, what are we going to do for the next 30 to 50 years?" Salehi said.

The Bushehr plant is not directly under UN sanctions, although the Security Council has slapped Tehran with four sets of punitive measures for pursuing its uranium enrichment programme.

Western countries suspect Tehran is enriching uranium to make nuclear weapons, a charge strongly denied by Iran. Enriched uranium can be used to power nuclear reactors as well as to make the fissile core of an atom bomb