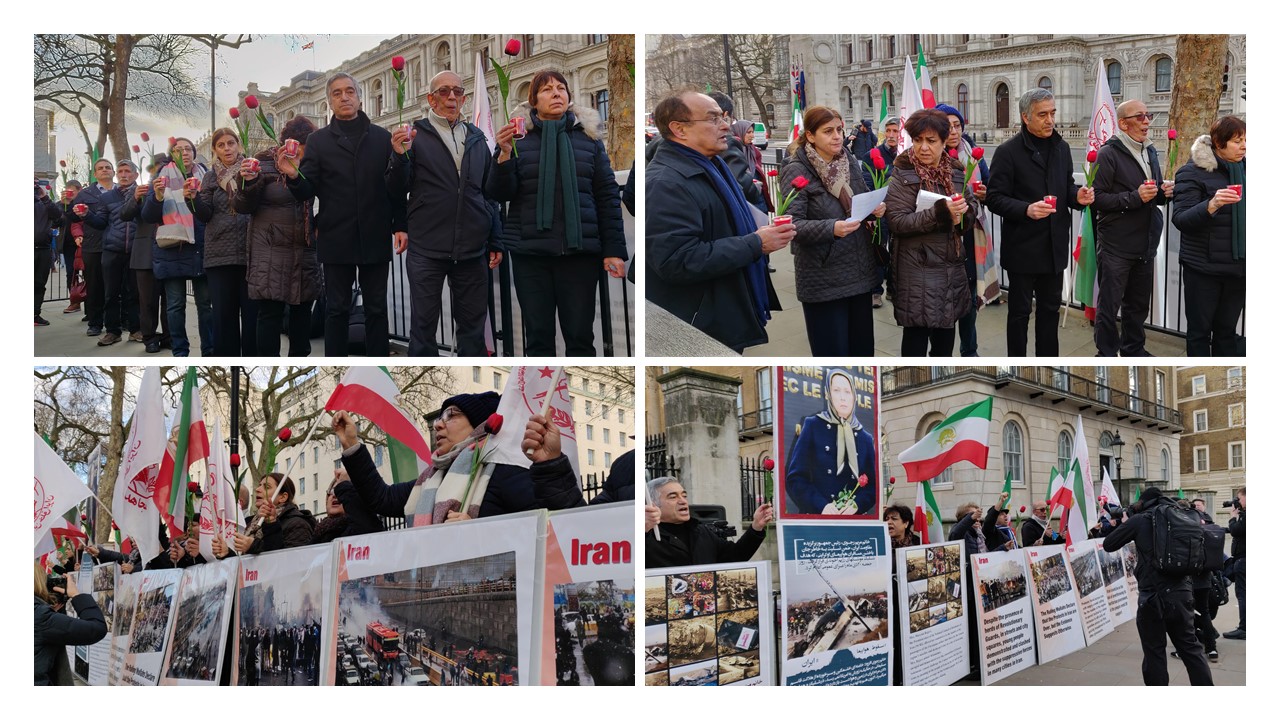 Written by Mahmoud Hakamian on 12 January 2020.

Anglo Iranians, supporters of the People’s Mojahedin Organization of Iran (PMOI, Mujahedin-e Khalq or MEK) and the National Council of Resistance of Iran (NCRI), held a protest rally in front of the United Kingdom Prime Minister’s office in London, commemorating victims of the Ukrainian passenger jet, downed by the Iranian regime on Wednesday.

This gathering was organized following the call by Mrs. Maryam Rajavi, the NCRI’s President-elect, declaring Friday as a day of mourning for the victims of the Ukrainian flight 752 crashed Wednesday morning.

The Anglo-Iranian Communities in the UK and supporters of the NCRI and the MEK paid tribute to the passengers of the Ukrainian airliner shot down by the Iranian regime’s missiles in Tehran. Similar events were held in several other European countries. 176 passengers on board the airliner died including several British citizens.

Hossein Abedini of the National Council of Resistance of Iran told the gathering:

“As Mrs. Maryam Rajavi, the President-elect of the National Council of Resistance of Iran (NCRI), pointed out, Khamenei, shaken and demoralized over the elimination of Qassem Soleimani, cannot challenge the United States, but feels free to fire at the people of Iran in the air and on the ground and taking revenge on the Iranian people.

Mohamad Sulimani, Anglo-Iranian artist and human rights activist from Edgeware told the rally: “We join the Iranian opposition Leader Mrs. Rajavi, in offering our condolences to the families of the passengers of the Ukrainian airliner shot down by the Iranian regime’s missiles.

On January 9, before the regime admitted to its crime of shooting down the passenger jet under international pressure, Mrs. Maryam Rajavi had affirmed that the passenger jet was shot down by the Iranian regime’s missile.

On January 11, thousands of students in several universities in Tehran protested over the downing of Ukrainian passengers. The students chanted “We did not give martyrs, to praise the murderous leader,” “Don’t be afraid, we are all united,” “Do not call me seditionist, you are the sedition, the oppressor.”

Simultaneous with Tehran, demonstrations in protest have spread to other cities, including Isfahan, Mashhad, Shiraz, Sanandaj, Babol and Lahijan (northern Iran).