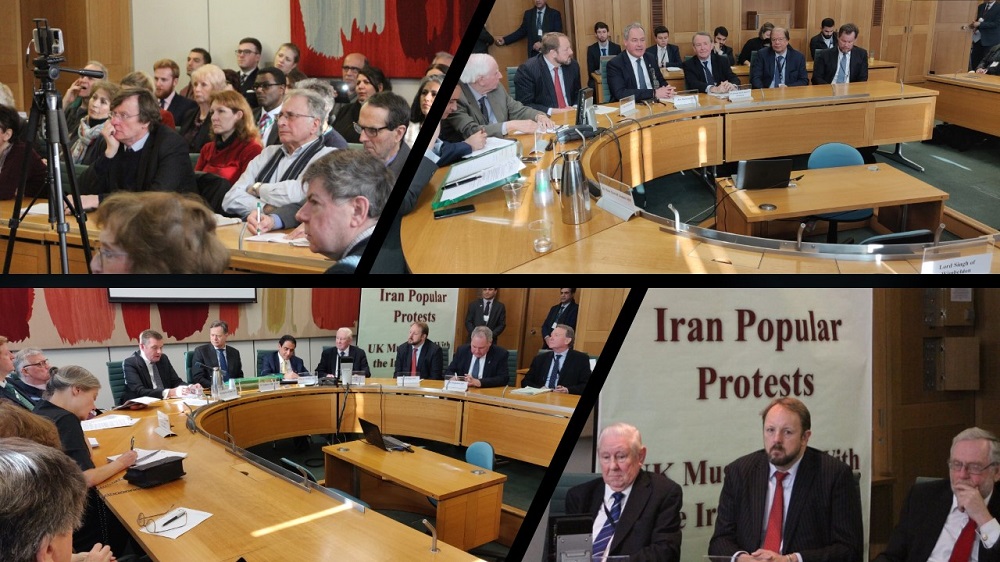 At a conference in the United Kingdom House of Commons on Tuesday, January 21, cross-party Members of Parliament and Members of the House of Lords discussed the future UK Policy on Iran following the recent protests in the country.

At a conference in the United Kingdom House of Commons on Tuesday, January 21, cross-party Members of Parliament and Members of the House of Lords discussed the future UK Policy on Iran following the recent protests in the country.

The cross-party speakers stressed that the waves of popular Iran protests across Iran since December 2017 with chants targeting the regime, its Supreme Leader, Ali Khamenei, and the Islamic Revolutionary Guard Corps (IRGC), demonstrate the public rejection of the ruling regime and a nationwide demand for regime change and to establish a democratic, free Iran.

The British MPs strongly supported the Iran protests which continue across the country despite the regime’s brutal response with the IRGC and Security Forces killing at least 1,500 protesters, arresting 12,000 and injuring 4,000 of protesters.

In a video message to the conference, Mrs. Maryam Rajavi, the President-elect of the National Council of Resistance of Iran (NCRI), said: “I thank you for supporting the uprising of the people of Iran by urging your government to adopt a decisive policy against the Iranian regime and to recognize the right of the Iranian people to resistance. The Iran uprising will not be stopped. The struggle of the people of Iran, the resistance units, and rebellious youth will continue to end the religious fascism.”

“We are at a sensitive moment in the history of the people of Iran. The Iranian Resistance seeks to establish a republic based on people’s free choice and vote, separation of religion and state, pluralism, gender equality, and abolition of the death penalty,” Mrs. Rajavi added.

While referring to the tragic downing of the passenger plane in Tehran by two IRGC missiles that killed 176 innocent people Mrs. Rajavi said: “This is a horrific crime which caused outrage in Iran and around the world. The people of Iran will neither forgive nor forget. Khamenei, Rouhani and commanders of the Revolutionary Guards must be brought to justice.”

Dr Matthew Offord MP, the chairman of the conference, while calling for a firm policy vis-à-vis the Iranian regime, said: “Our Government must work with the EU to proscribe the IRGC and Iran’s Intelligence Ministry as terrorist organizations in their entirety in order to deny the regime resources and funds it will use to suppress protesters and export terrorism.”

The cross-party panelists also criticized the current policy towards the Iranian regime pursued by the UK Government and the Foreign Office’s long fixation to elevate a so-called moderate faction from within the ruling theocracy, as being out of touch with the realities in Iran and a dangerous illusion.

“The UK Government should stand with the Iranian people and the NCRI, recognizing their democratic aspirations and their right to change the regime for a better future”, the Rt Hon David Jones MP, former Secretary of State for Wales, said. He also underlined the role of the Iranian Resistance movement, NCRI and MEK, and the MEK’s Resistance Units and their key role in organizing the recent protests in Iran.

“In the short term this firm policy must include the UK Government working with international allies at the UN and the EU to support the brave protesters in Iran; and to pressure the regime to immediately release all political prisoners, dual citizens and those arrested in the recent popular uprisings”, he added.

Prof. Lord Alton of Liverpool raised the issue of the killing of at least 1,500 protesters during the November protests and the regime’s increasing crackdown on public dissent since 2018, and said: “UK Government must work with allies at the UN to hold the regime and its leaders to account for their atrocities including the killing of protesters and the brutal crackdown on the recent popular uprisings as well as the 1988 massacre of 30,000 political prisoners in Iran’s prisons by referring them to an international tribunal.”

Steve McCabe MP joined the other panelists in backing the call by the NCRI President-elect, Maryam Rajavi, on the UN Security Council to send a fact-finding mission to Iran to investigate the killing of protesters and reports of torture in Iran’s prisons of those arrested.

“We expect the UK Government to urgently take the necessary actions, as a permanent member of the UN Security Council, to secure this fact-finding mission,” he said, pointing out that UK must face the reality that we cannot negotiate with the regime because it has no respect for human life, law, and order or the diplomatic staff of other countries.

With regard to the recent events in the region, speakers pointed to the protests against the Iranian regime’s meddling in Iraq and Lebanon for its destructive meddling in these countries. They agreed that these protests together with the elimination of the IRGC’s Quds Force commander Qassem Soleimani have ruined the regime’s plans to continue to export terrorism and warmongering abroad.

Rt Hon John Spellar MP said: “This is a regime responsible for the destabilization of Iraq, Syria, Yemen, and right away the Middle East, resulting in many deaths.”

The participants also warned about the Iranian regime’s repeated steps to break key restrictions set out in the Iran Nuclear Deal, the JCPOA, as a sign of the regime’s domestic, regional and international impasse.

The cross-party panelists welcomed the UK Government’s recent actions including the proscribing of the entirety of Hezbollah as a terrorist group and the decision with France and Germany to trigger the Dispute Resolution Mechanism under the JCPOA.

However, they underlined that while these are positive steps in right direction, the UK should do more to increase pressure on the regime in Iran, as part of a firm policy, by proscribing the entire IRGC as a foreign terrorist organization and by working with international allies to reinstate the six UN Security Council resolutions on Iran’s nuclear program and the nuclear-related UN sanctions.

Hossein Abedini, a member of the NCRI Foreign Affairs Committee, thanked the Members of Parliament for their support for the cause of human rights and democracy in Iran and said: “In gathering IRGC and its Bassiji thugs across the country [for the Friday-prayer sermon], Khamenei tried to confront the crippling blow with the termination of Soleimani and chants of death to Khamenei, and IRGC you’re ISIS by millions of Iranians. He displayed his deadly impasse and increased the nation’s rage.”

Previous articleIranians, MEK Supporters Commemorate the Last Group of Political Prisoners’ Freedom in 1979, Express Solidarity With Iran Protests
Next articleIran Protests: Conference in the British Parliament in Support of the Iranian People’s Uprising