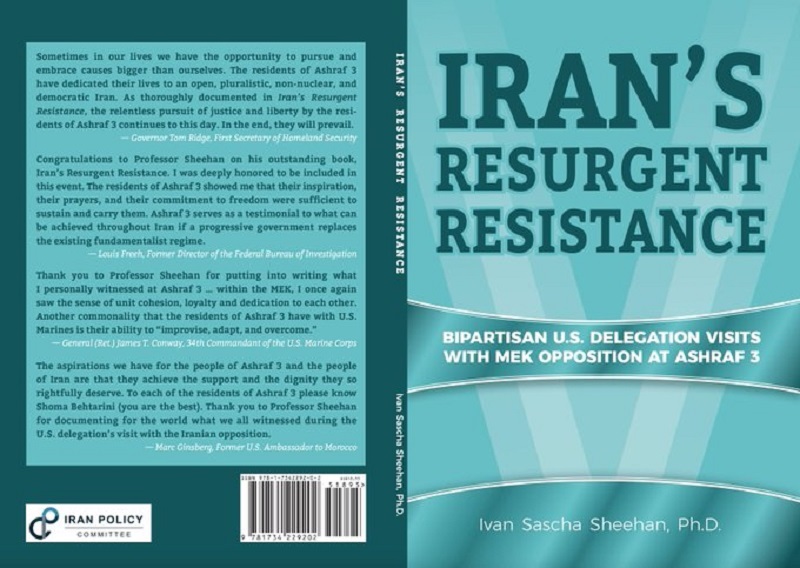 Written by Mahmoud Hakamian on 13 January 2020.

In a book called Iran’s Resurgent Resistance, Professor Ivan Sascha Sheehan, a counterterrorism scholar and leading authority on U.S. policy toward Iran, writes about a journey made by a bipartisan delegation of senior U.S. officials deep into the community of the Iranian Resistance.

This journey was to Ashraf 3, Albania, home to some several thousand members of the leading Iranian opposition group, the People’s Mojahedin Organization of Iran (PMOI), also known as the Mujahedin-e Khalq or MEK.

In this book, Professor Sheehan outlines how U.S. officials routinely fail to understand the Iranian regime’s nature, temperament, disposition, and designs. Sheehan reveals how Iran’s principal opposition to clerical rule has been falsely portrayed in Washington and makes the case that Iran’s dissident community is best positioned to bring about democratic change. The author challenges the false narratives peddled by the regime’s illiberal apologists, examines the opposition’s call for a democratic future, and makes a convincing case for a more effective U.S. policy toward Iran.

Congratulations to Professor Sheehan on his outstanding book, Iran’s Resurgent Resistance. I was deeply honored to be included in this event. The residents of Ashraf 3 showed me that their inspiration, their prayers, and their commitment to freedom were sufficient to sustain and carry them. Ashraf 3 serves as a testimonial to what can be achieved throughout Iran if a progressive government replaces the existing fundamentalist regime.

Iran’s Resurgent Resistance well documents the Martyrs Exhibition. This is more than an exhibition. It is an evidence room with photographs and digital records. It is time to put all of the documentation together as the Simon Wiesenthal Center did after World War II. The Martyrs Exhibition is a catalyst for criminal accountability, just as Ashraf 3 is the starting point for a democratic Iran.

“You can imprison a man or a woman, but you cannot kill an idea.” Like Professor Sheehan, I met several people at Ashraf 3 who had been imprisoned and tortured. Each of them, and those who did not survive, are human tributes to courage and sacrifice. Iranians have a great culture and history that are rich in both tradition and contributions to the rest of the world, but they are not well represented by the regime in Tehran.

Thank you to Professor Sheehan for putting into writing what I personally witnessed at Ashraf 3. The residents of Ashraf 3 were not the first to show me the ability to endure loss and yet move on through courage and determination; I have witnessed these traits time and again within the United States Marine Corps. However, within the MEK, I once again saw the sense of unit cohesion, loyalty, and dedication to each other. Another commonality that the residents of Ashraf 3 have with U.S. Marines is their ability to “improvise, adapt, and overcome.”

On the portraits of each of our aspirations, there’s a field of dreams and hopes. There are successes and there are failures. There are achievements as well as setbacks. But the one thing that drives us Americans is the belief that what we wish to achieve for ourselves can be achieved by all people who aspire to freedom, liberty, and dignity. This field of dreams is shared by everyone who was present at the gathering of the Iranian opposition in Albania during the summer of 2019. The aspirations we have for the people of Ashraf 3 and the people of Iran are that they achieve the support and the dignity they so rightfully deserve. To each of the residents of Ashraf 3 please know Shoma Behtarini (you are the best). Thank you to Professor Sheehan for documenting for the world what we all witnessed during the U.S. delegation’s visit with the Iranian opposition.

Previous articleNCRI and MEK Supporters Hold Convention in California: Solidarity With Iran Protests and Airliner Victims
Next articleIran Protests; Iran Rises up, Protests and Uprising in at Least 17 Provinces so Far