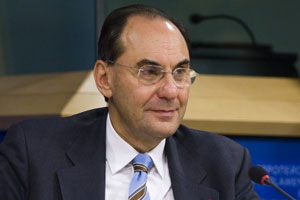 As a surprising number of European voices were calling for the US to grant sanctions relief to the Iranian regime amidst the coronavirus pandemic, Iranian officials repeatedly indicated that they don’t really need this relief in order to address the crisis. At times, they have explicitly declared that they are handling the situation well on their own. And although this is a bald-faced lie, it demonstrates that any money given to the theocratic regime would surely be dedicated to causes other than safeguarding public health and helping the people to meet their basic needs at a time of social distancing.

In fact, in comparison to most of the nations that have been heavily affected by covid-19, the Iranian authorities have been notably lax about that distancing. A number of government officials have dismissed the very concept of quarantines as a “medieval” solution. They continued to insist that strong measures were not needed even as the number of cases climbed into the tens of thousands. And even after regime’s President, Hassan Rouhani, finally accepted the importance of urging people to separate, he soon reversed course by setting a deadline of April 11 for the resumption of many economic activities.

This week, a group of ethnic Iranian medical professionals wrote an open letter explaining that the effort to return Iranians to work could kill up to a million people. The signatories also pointed to that policy as a showcase for the usual inhumanity of a regime that has traditionally been far more concerned with consolidating its hold on power and promoting conflict between the Western and Islamic worlds than with serving the good of its own people.

These misplaced priorities go a long way toward explaining why Tehran is simultaneously demanding sanctions relief and demonstrating a lack of interest in using its own wealth to limit the spread of coronavirus.

On Monday, regime’s Supreme Leader Ali Khamenei gave approval for the release of one billion dollars from the country’s sovereign wealth fund, ostensibly to support the fight against covid-19. But this was just a propaganda move. Mrs. Maryam Rajavi, the President-elect of the National Council of Resistance of Iran (NCRI) called the move a token which is less than a day’s salary of Iraqi and Afghan mercenaries of the terrorist Quds force”

“The token aid given by Khamenei and Rouhani to three million deprived families is less than a day’s salary of Iraqi and Afghan mercenaries of the terrorist Quds force. The insulting gesture reflects regime fear of an uprising. Khamenei controls hundreds of billions of dollars of the nation’s wealth plundered by the IRGC and other major economic institutions and can easily pay the expenses of the impoverished so that they could be quarantined.”  Rajavi said.

As the Iranian physicians’ letter made clear, the sovereign wealth fund represents only a portion of the money that would already be available to the regime if it was truly interested in addressing the public health crisis. Khamenei wields direct control over a number of so-called religious institutions that have stockpiled hundreds of billions of dollars over the years. And the powerful Islamic Revolutionary Guard Corps has been a massive repository of untapped financial resources ever since it began systematically taking control of domestic industries.

Today, the IRGC is reputed to handle the vast majority of the nation’s gross domestic product. But far from using this great wealth to advance the public good, the hardline paramilitary has simply made a habit of financially dominating Iran’s fast-growing underclass while also spearheading violent crackdowns on dissent throughout Iranian society. Last November, the IRGC was primarily responsible for the regime’s response to nationwide protests in which an estimated 1,500 activists were killed.

Perversely, at a time when the blood of those protesters had hardly dried, Supreme Leader Khamenei directly ordered the IRGC and the Iranian military to take the lead in responding to coronavirus outbreaks. There was, of course, no corresponding instruction for the IRGC to utilize any of its accumulated wealth or to do anything apart from enforcing inconsistent social distancing guidelines through brute force.

The paramilitary response to covid-19 was certainly not the only option, but Tehran has shown no interest in any alternative that might protect the Iranian people without also reinforcing their subservience to a criminal ruling class. If this was not obvious from the outset of the crisis, it certainly became clear last month when Iranian officials rejected at least two offers of foreign assistance in containing the coronavirus and treating covid-19 patients.

Despite keeping the Iranian regime under sanction and struggling with its own outbreaks, the U.S offered medical aid directly to Iran, but Khamenei responded by declaring that the offer “made no sense,” before later voicing wild conspiracy theories and suggesting that American doctors might poison Iranians and prolong the disease. The regime hinted at a similar paranoia toward all Western nations when it rejected an offer by Doctors Without Borders to build and run a makeshift hospital capable of treating 50 patients at a time.

On some level, this paranoia is probably a bluff. In rejecting Doctors Without Borders, officials specifically scoffed at the fact that the resources on offer included nothing that was otherwise unavailable because of US sanctions. Obviously, with this statement the regime effectively contradicted the entire premise of its appeals for sanctions relief in the era of coronavirus.

The mullahs say that the situation is so bad in their country because sanctions have prevented Iranian doctors from accessing vital medical resources. This statement contradicts the fact that the U.S. has repeatedly pointed out that there are already humanitarian exceptions for the sanctions that are still being enforced. In pushing for sanctions relief, the Iranians didn’t mean to obtain humanitarian goods, but rather to gain access to the cash that would allow them to avoid delving into resources that would otherwise be dedicated to supporting terrorism, promoting extremism, and destabilizing the region.

Anyone who looked closely could have seen through this scheme from the very beginning and the regime’s actions over the past two months have made the situation increasingly evident. European policymakers can be forgiven for supporting the Iranian Government appeals when the crisis was in its infancy, but now that the regime has exposed its own misaligned priorities and has actually freed up some of the money it was selfishly hoarding, there can be no further excuse for supporting sanctions relief, least of all with no strings attached.