Mullahs Are Masters of Media Manipulation- by Struan Stevenson 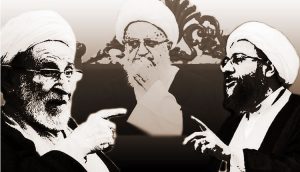 In a new article for United Press International, former European lawmaker Struan Stevenson addresses the Iranian regime’s longtime misinformation campaign and systematic deception.  The regime’s demonizing campaign against its viable alternative, the National Council of Resistance of Iran (NCRI) and its biggest constituent group the People’s Mojahedin Organization of Iran (PMOI/MEK), has been continuing for the past four decades.

News that leader of d extreme left #Podemos Party in #Spain had received $9.3 million from #Iran finally shone a light on what has been long suspected by many. Also manipulation of Western media by d mullahs has long been assumed
#MEK #FreeIran2020 https://t.co/OFDRgKKfj5

In his article on UPI, Mr. Stevenson has shed light on various aspects of the regime’s misinformation campaign.

The following is the full text of his article:

The news that the leader of the left-wing Podemos Party in Spain had received $9.3 million over a 3-year period from the Iranian regime, finally shone a light on what has been long suspected by many. El Mundo, the second largest newspaper in Spain, reported last month that the Economic & Fiscal Crime Division of the Spanish Police (UDEF) had established that between 2012 and 2015, 360 Global Media, the media company owned by Pablo Iglesias, leader of Podemos, had received over €9 million from Iran.

El Mundo reported that evidence collected by the Police and their anti-money-laundering committee had identified how 16 companies suspected of money-laundering, had passed the cash to 360 Global Media through Emirates NBD (national Bank of Dubai) and other intermediary banks. The majority of the cash transfers were made to the 360 Global Media company which is the producer of programs for Hispan TV, the Spanish-language satellite channel of Iran’s state-run broadcaster (IRIB). Hispan TV is run by Iranian citizen Mahmoud Alizadeh Azimi and its programs mainly target Latin American countries such as Venezuela, Bolivia, Chile, Ecuador, Peru, Colombia, Nicaragua and Mexico.

Manipulation of the Western media by the theocratic regime has long been assumed. For decades the mullahs have set out to demonize their main democratic opposition movement, the People’s Mojahedin Organization of Iran (PMOI), who they fear and hate with a visceral passion. The left-wing, anti-American press, has been particularly susceptible to Iranian manipulation, with ludicrous and ill-founded articles appearing in The Guardian, The Independent, Channel 4 News, Der Spiegel and the Frankfurter Allgemeine Zeitung. These articles invariably repeat the same propaganda hogwash trotted out by the mullahs’ Ministry of Intelligence & Security (MOIS), who maintain a network of spies, agents and so-called ‘friendly journalists’ across the world.

A court ruling in Germany in July exposed this demonization campaign. The Hamburg Regional Court ruled that the Frankfurter Allgemeine Zeitung had violated basic journalistic standards in an article traducing the PMOI and could face fines of up to €250,000 for each of three offending claims, which the court ordered to be removed from online archives and to be withheld from any subsequent publication. The Hamburg Court verdict mirrored a similar ruling in March 2019 against Der Spiegel, following a legal challenge by the National Council of Resistance of Iran (NCRI), the coalition of Iranian opposition movements, the main component of which is the PMOI. In both court cases the evidence presented exposed beyond doubt that the MOIS was the source of the lies and disinformation against the PMOI.

Further proof of this disinformation campaign emerged in Albania in July, when the Albanian government deported an Iranian national, Dabiel Kassrae, who also had Italian citizenship. He was sent back to Italy on an order signed by Interior Minister Sander Lleshaj and banned from re-entering Albania for 15 years. Kassrae had pretended to be a journalist after moving to Albania four years ago, at the same time several thousand PMOI supporters were re-located to Tirana following their escape from persecution in Iraq. Under his disguise as a journalist, Kassrae was frequently found in and around the compound where the Iranian refugees were housed, repeatedly attempting to recruit some of them to speak out against the PMOI. It transpired that he was working for the mullahs’ regime and he was declared persona non grata and kicked out of the country.

Kassrae was only the most recent example of an Iranian to be expelled from Albania. In January this year, two diplomats from the Iranian Embassy in Tirana, Mohammad Ali Arzpeima Nemati and Seyed Ahmad Hosseini Alast, were expelled after it was discovered they were agents of the Islamic Revolutionary Guards Corps (IRGC) and were plotting against PMOI supporters at Manza. It was also established that they had been close collaborators with Qassem Soleimani, the terrorist leader of Iran’s extra-territorial Quds Force, who was killed in an American drone strike in January 2020. This was the second time that Iranian diplomats had been ejected from Albania. In December 2018, the Iranian Ambassador and First Secretary were declared personae non gratae by Albania’s Prime Minister Edi Rama.

The Iranian regime has now been exposed for buying influence in leftist Western publications. Surely that should sound alarm bells for prominent newspapers and media outlets who pay lip-service to absurd and disgraceful fabrications about the Iranian opposition, propagated by a pariah regime that is widely recognised as a sponsor of international terror and assassination. Over many years it has become clear that the demonization and deliberate spreading of misinformation about the PMOI by Tehran, is invariably a prelude to subsequent attacks and assassinations. It is a softening up process aimed at tarnishing the image of the PMOI in the eyes of the public, so that subsequent atrocities do not inspire major condemnation. The Western media who accept clandestine payments or other inducements from the mullahs’ fascist regime to publish such fabrications should hang their heads in shame.