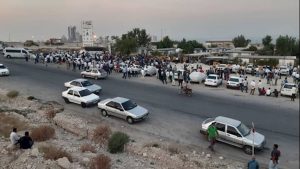 Mrs. Rajavi hailed the perseverance of the striking oil workers in Khuzestan, Bushehr, Hormozgan, Fars, Isfahan, and Ilam, who are demanding their fundamental rights. She urged all workers across the country, especially oil workers, to rise up to their support.

On Tuesday, August 4, oil workers of Isfahan and Jahanpars (Ilam-Mehran) refineries joined the four-day strike by the workers and employees of oil, gas, and petrochemical facilities and refineries in Khuzestan, Bushehr, Hormozgan, and Fars provinces.

The striking workers are enduring unbearable working conditions in scorching heat and the harshest living conditions. They do not have job security, having been forced to sign temporary contracts, which is not covered by health insurance and pensions. The employer can fire them whenever they want. Their wages are many times below the poverty line, and even these meager wages have not been paid for several months.

Mrs. Maryam Rajavi, the President-elect of the National Council of Resistance of Iran (NCRI), hailed the perseverance of the striking workers in Khuzestan, Bushehr, Hormozgan, Fars, Isfahan, and Ilam, who have risen up for their fundamental rights. She called on all workers across the country, especially oil workers, to rise up to support their fellow workers.

While saluting the workers on strike in the oil facilities and refineries of Khuzestan, Bushehr, Hormozgan, Fars, Isfahan and Ilam, I urge working people across #Iran, particularly the oil workers and workers in other sectors, to rise up in support of them. #Iranprotests

Mrs. Rajavi urged labor rights organizations and trade unions to condemn the anti-labor policies of the clerical regime and to support the protests and strikes by Iranian oil workers. She called on the International Labor Organization (ILO) to blacklist the clerical regime for violating workers’ rights and suppressing them.

I urge labor unions and rights advocates to condemn the clerical regime’s policies against workers, and support the protests held by the oppressed workers in #Iran. I urge the ILO to blacklist the mullahs’ regime for trampling the rights &suppression of Iranian workers.