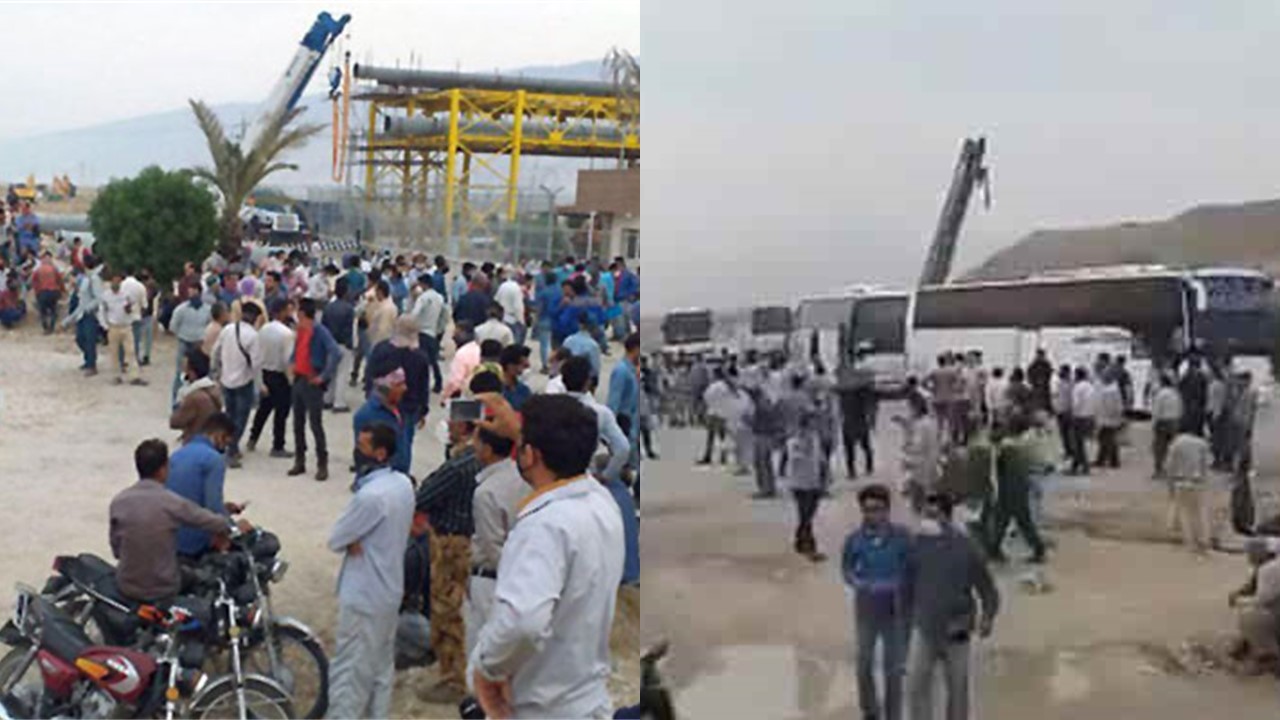 Oil and petrochemical workers are staging strikes in southern oil-rich provinces of Iran. Although there are different daily protests by all walks of life in Iran, the oil workers’ strike has a direct impact on the regime’s oil-dependent economy. Workers slogans, their demands and most importantly identifying the regime as the source of their problem also debunks the regime’s continuous efforts to blame U.S. sanctions as the real source of the economic crisis.

These strikes started on Saturday, when workers and employees of Abadan and Mahshahr refineries, Qeshm Heavy Oil Refinery, as well as workers and employees of Parsian Refinery, Petrochemical Company in Lamerd in Fars province, and phases 22 and 24 of South Pars in Kangan in Bushehr Province protested to their harsh working conditions, lack of minimum safety provisions, and their delayed paychecks. These striking workers condemned those breaking the strike and underscored that their names would be published in the next phase of the protest campaign.

In this regard, Mrs. Maryam Rajavi, the president-elect of the National Council of Resistance of Iran (NCRI), hailed the striking workers and emphasized that the oppressed workers have risen to obtain their plundered rights by the anti-labor regime. “Through oppressive contracts, the clerical regime exploits the workers and does not even pay their meager wages. It squanders the country’s capital in nuclear and missile projects as well as terrorism or plunders it or sends it to the bank accounts of its officials and their families abroad,” Mrs. Rajavi underscored.

The Iranian regime’s Supreme Leader Ali Khamenei, President Hassan Rouhani, and other officials have been trying to blame international sanctions for the economic hardships. The regime’s ongoing support of terrorism, testing ballistic missiles, and institutionalized corruption not only debunk the mullahs’ propaganda but show they have no intention of helping people, particularly amid the COVID-19 pandemic and its rising death toll. Recently the regime’s Revolutionary Guards (IRGC) tested new ballistic missiles during the second day of the final stage of their naval drills in southern Iran. In addition, Hassan Nasrallah, head of Lebanese Hezbollah terrorist organization, in a recent interview said: “The Iranian government has been paying us monthly. But the last time Haji Qassem [Soleimani, the eliminated head of the IRGC Quds Force and the regime’s terror mastermind] came to Beirut and we met, he paid our wages for the four upcoming months.”   The People’s Mojahedin Organization of Iran (PMOI/MEK) revealed in April 2020 that the IRGC Quds Force “is continuing to transfer cash to the Hezbollah in Lebanon. Part of the money is sent in the form of special packages and suitcases carried by the Quds Force’s Intelligence Protection Officers in flights from Tehran to Lebanon.” These facts only confirm that the mullahs’ regime, having control over Iran’s vast resources, can help the Iranian workers but it refuses to do so, and it prioritizes export of terrorism over people’s lives and welfare.

In a nutshell, the regime refuses to pay workers paychecks and blames sanctions and not “having enough resources” but continues funding its illicit activities, for which it has been sanctioned.

Meanwhile, the huge financial institutions, such as Astan-e Quds Razavi and the Execution of Imam Khomeini’s Order (EIKO) and other foundations possessed by Khamenei, refuse to help the Iranian people.  According to Behzad Nabavi, a government minister in several administrations in Iran: “There are four institutions which control 60 percent of the national wealth. This includes Executive Headquarters of Imam’s Directive (Setad Ejraie Farman Imam), Khatam-ol–Anbia Base, Astan-e Quds and Foundation of the Oppressed and Disabled. None of these institutions are in connection with the government and parliament.”

The state-run Jomhuri-e Eslami daily in its editorial in early April wrote: “These financial powers include the Execution of Imam Khomeini’s Order, Mostazafan Foundation of Islamic Revolution and Astan Quds Razavi. The vast financial and facilities these centers possess, if used to help the damaged society sectors by the coronavirus, will resolve these sectors’ problems rapidly and completely. These assets and facilities belong to people and should be exactly used in such situations to resolve people’s problems.”

“Considering the economic recession caused by the coronavirus, what will the big financial institutions such as the Execution of Imam Khomeini’s Order, the Mostazafan Foundation of Islamic Revolution and Astan Quds do if they do not spend their money for the impoverished people?” the article added.

In addition, the state-run Jamaran website published an article on May 1, the International Workers’ Day.  The statistics this state-run daily gives, although many times less than the reality, are nonetheless staggering.

“40 years of consecutive inflation and the recent decade’s economic crisis, which have destroyed Iran’s middle class, have increased the population of workers. If a worker, before the revolution, could purchase a house in 24-year installments, now in 2020, they must pay 137 years of installments to have a house. while workers’ income has increased 900 times, yet approximately, the fuel, bread, and automobile prices have increased by a factor of 3,000, housing prices 6,000, and the coin price 10,000. Of course, this is only about 12-13 million official workers in the country. There are about 5 million workers in the country who are completely forgotten, and their situation is worse,” read the article.

The recent strike by oil workers and employees, along with ongoing protests by workers and people from all walks of life in Iran, shows they know the real source of their problem is the regime. These protests and strikes also show how these workers are grappling with poverty and cannot tolerate the situation anymore. They have reached a point where they have nothing to lose and this is a very dangerous situation for the regime.

As the state-run Jamaran daily wrote: “A huge part of the November 2019 protesters [the nationwide Iran protests sparked by the sudden increase in fuel prices] are the unemployed children of these workers. This year, what choice does a government with zero oil revenue and a 50% budget deficit have other than printing banknotes? And this means a higher inflation rate and workers’ table shrinking, making the next protesting force more explosive. Will anyone listen? Is there a will to bring the country out of this bone-breaking deadlock?”

In this regard, the Setareh Sobh daily, in an article, published in August 1, wrote: “We have to wait for all kinds of social ills and social uprisings. The same uprisings that erupted in December 2017 and November 2019; If the government cannot answer people’s frustration and the economic problems, it must wait for the consequences and the next bad events.”