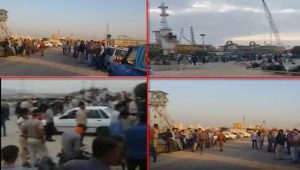 Since Saturday, August 3, 2020, workers and employees of several oil industry facilities, including Abadan and Mahshahr refineries, Qeshm heavy oil refinery and Parsian petrochemical refinery in Lamerd (Fars Province) and phases 22 and 24 of South Pars in Kangan (Bushehr), have been on strike. They endure harsh working conditions in the scorching heat of the southern regions and the most difficult living conditions and are deprived of their fundamental rights.

1) The workers of these facilities and refineries, which are often controlled by the Revolutionary Guards (IRGC), do not have job security. They are forced into signing temporary contracts and could be fired by the employers at any time.

2) Workers are not covered by insurance, including health insurance and pensions.

3) Their monthly wages are many times below the poverty line. These meager wages, in the face of the rising and rampant inflation, barely support them for a week.

4) They have not been paid the very same meager wages for several months.

5) They lack the minimum safety and recreation provisions at the workplace, especially in the scorching heat of the southern tropics.

Depriving workers of their minimum wages comes as these refineries are working at full capacity and selling their products at exorbitant prices. In November 2019, the clerical regime tripled fuel prices, raising it from 1,000 tomans to 3,000 tomans per liter. At the same time, Bijan Zanganeh, the regime’s Oil Minister, deceitfully claimed, “We will return all of the additional 31,000 billion tomans revenue obtained from raising the prices to the people,” according to Tasnim News Agency, on November 14, 2019. Mohammad Bagher Nobakht, Rouhani’s deputy and head of the Planning and Budget Organization, also said on November 12, 2019, “The Planning and Budget Organization was tasked to transfer all the revenues resulting from the new price change to the account of the heads of households.” But not even one rial of this increased revenue reached the heads of households. Far worse, nothing was added to the wages of workers who produce about 120 million liters of petrol per day. All the revenues were plundered by the repressive institutions under the control of the regime’s supreme leader.

It also calls on the International Labor Organization (ILO), Trade Unions, and labor rights organizations to condemn the anti-labor clerical regime and to support the protests and strikes of Iranian oil workers.

The Committee on Labor