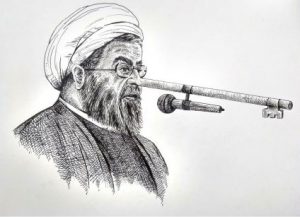 In his speech to the UN General Assembly session on Tuesday, September 22, the Iranian theocracy’s president Hassan Rouhani showed that he is living in cloud cuckoo land. In fact, if Pinocchio lied in the Twilight Zone, while the Twilight Zone merged with George Orwell’s novel 1984, the result would be vastly more honest and rational than Rouhani’s outlandish remarks. Listening to his fibs about the regime as “the axis of peace and stability,” one wonders if Tehran’s officials have now completely divorced reality, the eventual fate of every dictatorship.

Regime presidents are all supreme leader Khamenei’s men. So, Rouhani’s claims are only interesting in so far as they reveal the collective attitude that underpins them. In a sense, Rouhani doubly resembles Pinocchio: he is both dancing on the strings of Khamenei, and also tells lies that make him look even more ridiculous.

Tehran’s mullahs have mastered the art of projecting their own reprehensible behavior onto others. Rouhani’s mentor, Khomeini, used to brush aside opponents’ accusations of torture, famously quipping that dissidents are torturing themselves to make the regime look bad. Today, Tehran accuses its opponents of precisely the core characteristics that it itself embodies: terrorism, cultish behaviors, misogyny, sexual exploitation, religious hypocrisy, warmongering, imprisonment, torture, and hostage-taking.

In 1944, George Orwell began writing his novel 1984 after major powers at the time divided up the world into zones of influence partially during the Tehran Conference. The novel was not a cautionary tale of authoritarian communist states only; It was also an eerie predictor of Iran’s dystopian “Islamic State.” The totalitarian rule of the mullahs conducts mass surveillance, shuts down the internet at will, murders peaceful protesters in broad daylight, and carries out repressive regimentation of all behaviors, including compulsory veiling for women.

Today, in Iran, Big Brother is watching, the “Thought Police” accuses protesters of “waging war on God,” and the “Ministry of Peace” conducts perpetual terrorism and warmongering. Yet despite it all, for Rouhani “2+2=5.”

During his bizarre diatribe, the spokesman for the world’s foremost abuser of human rights blamed other nations for violating citizens’ rights, and gently reminded all: “Our nations and children deserve a better and safer world based on the rule of law.” It is hard to fathom how Rouhani can speak about a safer world for children when his regime is the last executioner of children in the world. And, the mullahs’ hands are still dripping with the innocent blood of 27-year-old pro-democracy protester Navid Afkari, who was brutally executed on September 12.

Not even the has Twilight Zone fashioned better fantasies. For example, not only is the foremost state sponsor of terrorism is in Rouhani’s alternate reality “the axis of peace and stability,” it is also “the harbinger of dialogue and tolerance.” But, wait there is more: It is also the “champion of the fight against occupation and extremism.”

Where to start? Shall we begin with the mullahs’ religious tolerance according to which religious minorities are routinely persecuted simply for practicing their faith? Or, its political tolerance that led to the massacre of over 30,000 political prisoners in 1988, the majority from the Mujahedeen-e Khalq (MEK), simply for exercising their basic political rights? Or, perhaps the regime’s dialogue with citizens over rising gasoline prices that resulted in the regime gunning down 1,500 peaceful demonstrators in November 2019?

Rouhani’s shedding of crocodile tears for the overthrow of the revered Iranian Prime Minister, Dr. Mohammad Massadeq was the height of hypocrisy. Did his mentor’s mentor Abolghassem Kashani not collude with the corrupt Royal Court and the coup plotters to topple Mossadeq’s government?

He also talked about supporting the “democratic achievements of Iraqi people” while Iraqi youth are on the streets chanting “Iran Get out!” And if his regime really “stood with the people and government of Lebanon,” why are the people of Lebanon protesting against Tehran and its puppet Hezbollah?

He says the regime “stood alongside the people of Syria” while in the same breath praising “our assassinated hero” Qassem Soleimani, who as the regime’s terrorist mastermind famously facilitated the mass murder of hundreds of thousands in Syria.

Before ISIS became popular in the eyes of extremists everywhere, the mullahs established an “Islamic State” in Iran in 1979. It has mass murdered ordinary citizens for their beliefs and suppressed women for 41 years, employing even more ruthless methods than those ISIS used. Yet, Rouhani claims that this is “moderate and rational Islam, not extremism.” This is the same moderate Islam that called for a British author’s assassination for writing a book deemed critical of Islam. A former regime president, Rafsanjani, said about this Islam: “Divine law defines four sentences for [dissidents] which must be carried out: 1. Kill them, 2. Hang them, 3. Cut off their arms and legs, 4. Banish them.”

So much for Rouhani’s version of moderation.

Rouhani was born Hassan Fereydoun. He changed his surname to Rouhani (literally, “cleric”) after the revolution for obvious reasons. He is a conman who perpetually invested in fraud. While criticizing the US for “equipping” Saddam during the Iran-Iraq War, he conveniently forgets that when American representatives secretly visited Tehran in 1986 to sell weapons to the regime, Rouhani was one of the three people who greeted them.

More importantly, the Iranian regime’s lies stem from its paranoia about popular uprisings; uprisings that are lurking in every city, and will eventually uproot the theocracy. No amount of lies can hide that stubborn truth.