NCRINational Council of Resistance of Iran
EN FR DE IT AR ES AL
HomeBlogWhen You Say: “Don’t Negotiate With Terrorists”, It Should Include State Terrorists
BlogOp-ed

When You Say: “Don’t Negotiate With Terrorists”, It Should Include State Terrorists 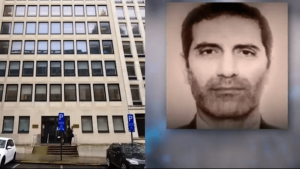 Most Western governments are technically in agreement about the principle that says you should never negotiate with terrorists. However, in practice, that principle has not been consistently applied and guidelines for behavior or policy are not really principles if they are only utilized at times when it is convenient.
There is currently a civil case under litigation in Belgium which could help to test commitment to the principle of non-negotiation, not just in Belgium but throughout Europe and the Americas. The case is the Iranian Resistance rally in 2018 which was nearly bombed by two operatives under the command of Iranian diplomat-cum-terrorist Assadollah Assadi.
The immediate question posed by the case concerns the appropriate penalties that Assadi should face for masterminding a bomb plot that could have killed dozens of Western politicians and any number of the almost 100,000 Iranian expatriates who made up the bulk of the event. But there is a larger question looming over this case and it has to do with the future of Western policies for dealing with a regime such as the Iranian theocracy that has no qualms about using terrorism as a form of statecraft.
The 2018 plot was certainly not the first instance of this phenomenon. It was not even the only one to be uncovered that year. Whereas the NCRI rally took place in June, a similar plot was disrupted in March near the community in Albania known, which houses members of the NCRI’s main constituent group, the People’s Mojahedin Organization of Iran (PMOI-MEK). Also in 2018, two Iranian operatives were charged in US court for surveilling the same group with the purpose of setting the stage for terrorist attacks.
In each of these examples, the responsible individuals did face consequences for their actions, if only in the form of limited prosecution or expulsion from diplomatic postings. Mistaken Western policies do not go so far as to promote negotiation with the actual agents involved in implementing a terrorist plot, but any sensible interpretation of the principle of non-negotiation would indicate that it doesn’t stop at the level of the foot soldiers. One should not negotiate with any entity within a terrorist organization.
In this sense, most Western governments routinely violate their principles whenever they engage in negotiations with the Iranian regime. This is to say that the entire Iranian regime is a terrorist organization. This should have been proven beyond a reasonable doubt by the 2018 bomb plot, which eschewed the usual reliance on proxies and instead channeled Tehran’s terrorist intentions straight through the state’s diplomatic infrastructure.
Some Western authorities seemed to acknowledge the implications at the time. A spokesperson for Belgian police said that nearly every Iranian diplomatic is actually an Iranian intelligence operative. This is certainly true of Assadi, who had been working right in the heart of the European Union, in Vienna, up until the moment when he was arrested on a trip to Germany, then extradited to Belgium.
Now, his trial provides critics of the Iranian regime with an important opportunity to interrogate Western policymakers over what they consider to be the correct response to a terrorist threat coming from what is supposed to be a tool of peaceful discussion between civilized governments. When Assadi is held accountable for his role in the terror plot, American and European lawmakers will have to consider whether culpability begins and ends with him or extends to the leadership that assigned him to his post and prepared and approved his plans.
If any government decides that the matter ends with Assadi, they should expect to face pushback from the would-be victims of this and other Iranian terror plots and they should be prepared to disavow the principle that rejects negotiations with terrorists because that is exactly what they will be doing every time they arrange meetings between Iranian and Western diplomats.
In all likelihood, Assadi’s trial will ultimately serve to expose an unwritten exception to the principle of non-negotiation, which has been in place for as long as the mullahs have been in power in Iran. Over those four decades, many Western policymakers have come to believe that negotiations with terrorists is acceptable in the rare instances where these criminals represent what they consider the only viable government of a sovereign state.
In its own right, this is a questionable amendment to the overarching principle, but what some American and European leaders still don’t recognize is that it doesn’t even apply to the Iranian situation. Had they been paying close attention, those same policymakers might have realized that the 2018 terror plot did a great deal to expose the fact that there is an alternative to Iran’s theocratic system and that it is very close to being realized.
That plot was largely conceived as a reaction against a nationwide uprising at the beginning of 2018, which gave voice to a popular desire for regime change. The would-be authors of that regime change are also the main targets of most Iranian political violence – the NCRI. This same group is the leading advocate for closure of Iranian embassies, not for the sake of depriving the Iranian people of representation on the world stage, but in order to give them a clearer voice through direct engagement between foreign governments and the Iranian Resistance.
The Western policymakers should understand that they do not need to allow Iran to be represented by state terrorists and they certainly do not need to violate their own principles to make it so.