Struan Stevenson – Iran Protests Are the Lull Before the Storm 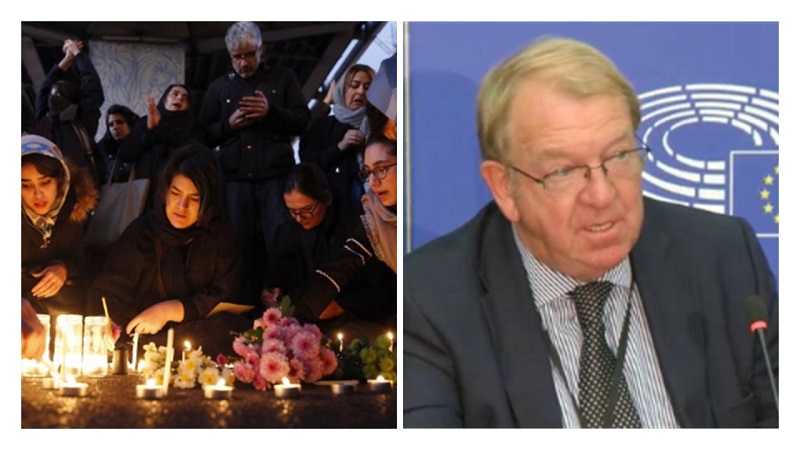 Struan Stevenson, in an article published on United Press International (UPI) on February 3 explained how the Iran protests are incessant and the Iranian regime is unable to control them

Struan Stevenson, a former member of the European Parliament representing Scotland and the president of the Parliament’s Delegation for Relations with Iraq, in an article published on United Press International (UPI) on February 3 explained how the Iran protests are incessant and the Iranian regime is unable to control them.

He described the Iranian society as a “powder keg of unrest,” and added that “the slightest spark will ignite a revolution, which will drive the theocratic regime from office and restore freedom to Iran’s 80 million enraged citizens.” He also described this situation as “The lull before the inevitable storm.”

#Iran A new revolution is coming.The brave #MEK resistance units who planned & abetted the recent uprising are preparing the ground for the regime's overthrow. EU must ensure that they are on the right side of history#FreeIran2020 #IranProtestshttps://t.co/XFyoWMywkQ via @upi

“The nationwide uprising last November that saw millions of mostly young Iranians take to the streets of cities, towns and villages across Iran has temporarily subsided. Sporadic outbursts of protest still take place, as thousands mourn their family members, murdered by the Islamic Revolutionary Guards Corps, the fascist regime’s Gestapo, during their ruthless crackdown on the uprising,” he wrote.

Referring to the regime’s deadly crackdown on protesters and its ongoing inhumane treatment of the arrested protesters, Mr. Stevenson wrote: “Thousands more were wounded and dragged from their hospital beds by the IRGC to join the estimated 20,000 imprisoned for taking part in the riots. Daily reports of prisoners being denied medical attention and dying under torture leak from behind the regime’s grim prison walls.”

While referring to the regime’s increasing infighting as the regime reaches its end, Mr. Stevenson wrote: “Recognizing that their days are numbered, the infighting between various factions of the ruling elite has intensified. Desperate to cling to power, the mullahs, who have stolen the Iranian people’s wealth, wrecked the economy, spread murder and mayhem across the Middle East and brutalized their own population, are engaged in a blame game, accusing each other of causing the crisis.”

Referring to the regime’s crime, and especially the responsibility of its supreme leader Ali Khamenei and president Hassan Rouhani, in shooting down a Ukrainian passenger jet and killing all the innocent passengers aboard, Mr. Stevenson wrote: “The psychotic supreme leader, Ayatollah Ali Khamenei, who for three days lied about the shooting down of the Ukrainian jetliner with 176 people on board, has ordered his Guardian Council, which supervises elections, to turn its fire on supporters of Hassan Rouhani, the Iranian president. Although the Western media has often portrayed Rouhani as a so-called ‘moderate,’ he is anything but.”

Referring to Rouhani’s dark record, particularly over 4,000 executions during his tenure, Mr. Stevenson wrote: “Since Rouhani took office in 2013, he has presided over the execution of more than 4,000 people, many of them political prisoners, including numerous women and even children. Iran is the world’s leading per capita executioner under Rouhani’s ‘moderate’ presidency.”

In his article on UPI, Mr. Stevenson also spoke about how Rouhani gave top positions of his government to the perpetrators of the 1988 massacre of 30,000 political prisoners, mostly members and supporters of the People’s Mojahedin Organization of Iran (PMOI, Mujahedin-e Khalq or MEK). He wrote: “He even appointed Alireza Avaie as his justice minister. Avaie is a listed terrorist in the West and is notorious for his role as a key executioner of political prisoners during a massacre in 1988, when over 30,000 supporters of the Peoples’ Mojahedin of Iran/Mojahedin e-Khalq (PMOI/MEK) opposition movement were hanged, in batches of over 150 each day, on the orders of Iran’s then supreme leader Ayatollah Ruhollah Khomeini.”

Referring to the regime’s crises vis-à-vis its upcoming parliamentary elections and the public boycott, Mr. Stevenson wrote: “The Guardian Council, on the orders of Ali Khamenei, has disqualified 90 members of the regime’s current parliament from standing for re-election in the forthcoming parliamentary contest. This has enraged Rouhani and his followers who are trying to carve out a larger slice of Iran’s dwindling cake for themselves and their cronies. It is reminiscent of the vicious territorial wars fought between the powerful Sicilian Mafia families in the 1980s, and it is a sure sign that the teetering regime is on its last legs. Rouhani’s threat to distort the election result by using his Interior Ministry’s control of the process to stuff ballot boxes, may create the very spark that ignites the downfall of this gangster government.”

In his article, Mr. Stevenson also referred to the regime’s failed foreign policy and the end of the era of appeasement. Mr. Stevenson also referred to the recent interview of the regime’s foreign minister, Mohammad Javad Zarif with Der Spiegel, during which he said that the regime is ready to negotiate with the United States, even after the killing of the regime’s Revolutionary Guards (IRGC) Quds Force chief Qassem Soleimani by the U.S. forces on January 3. He wrote: “Meanwhile, diplomatic efforts to avert the regime’s imminent collapse are accelerating. With their economy in freefall, Iran’s foreign minister, Mohamad Javad Zarif, has given the clearest evidence yet of the mullahs’ weakness, by telling Der Spiegel that even after the elimination of Iran’s top terrorist, Gen. Qassem Soleimani, his country is still willing to negotiate with the Americans, provided they immediately remove economic sanctions.”

“This humiliating climbdown by Zarif has caused outrage from some of the opposing factions in Tehran, with Mojtaba Zolnouri, head of the Iranian parliament’s national security commission asking why his government was begging for concessions from America after it had assassinated their homicidal hero Soleimani. Another incensed MP Amir Hossein Ghazizadeh Hashemi asked: ‘Which country’s foreign minister are you, Mr. Zarif? Which nation? Which government? This nation wants revenge on the killers of Haj Qassem … don’t you have modesty?!’” he added.

Calling upon the European countries to end the appeasement policy toward the regime and adopt a firm policy, Mr. Stevenson wrote: “It is time the European Union followed America’s example. The twin pillars that have propped up the Iranian regime are violent oppression at home and the export of terror abroad. Those pillars are crumbling. The EU should echo America’s call of support for the Iranian people. A new revolution is coming, and the brave PMOI/MEK resistance units who planned and abetted the recent uprising are preparing the ground for the theocratic regime’s overthrow. The EU must ensure that they are on the right side of history. The current lull before the storm may be their last chance to do so.”