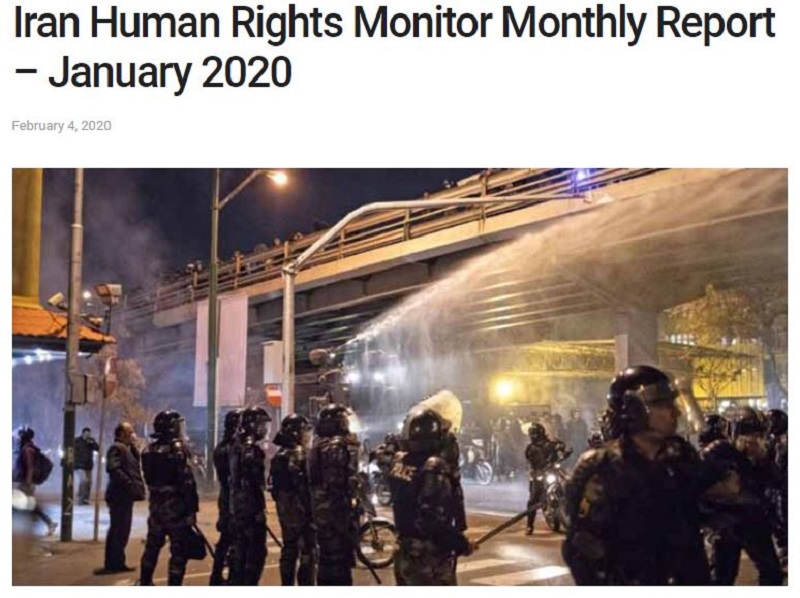 The Iranian regime’s security forces used violence in dealing with Iranian protesters during protests in January, against the regime’s downing of the Ukrainian passenger jet, says a leading Iranian human rights group.

The monthly report of Iran Human Rights Monitor – January 2020 briefly glances over #humanrights conditions in #Iran over the past month.https://t.co/Xg6AOjxE7z

In Its monthly report of January, Iran HRM, while referring to the regime’s crime in shooting down of a passenger jet and the subsequent protests by Iranian students and the regime’s excessive use of force in dealing with protesters, wrote: “A Ukrainian Airliner Boeing 737 was shot down early morning on January 8, just minutes after it took off for Kiev, capital of Ukraine, from Tehran’s Khomeini Airport. All the 176 passengers and crew onboard were killed. Despite denying involvement for three days, the Iranian regime officials finally admitted that the aircraft had been shot down by their anti-aircraft missiles. Only hours after official admissions, thousands of Iranian people and students took to the streets, to pay homage to the victims of the downing of the Ukrainian airliner and to protest the regime’s concealments. Videos obtained from the protests indicate extensive and heavy presence of security forces in the scenes of protests after the sunset. The footage also show that security forces lobbed tear gas at Iran protesters gathering outside the Amir Kabir University in Tehran and other parts of the capital, in a bid to disperse them.”

“Security forces also used pellet guns, plastic bullets, batons and pepper spray to contain the protests. There is no accurate statistics available on the number of arrested participants, but they clearly included a number of college students and student activists. In addition to violation of freedom of expression and freedom of assembly, mistreatment and torture of political prisoners, arrest, detention and handing down of heavy sentences for civil and human rights activists, and inhuman punishments such as execution and flogging are among the common and systematic practices of Iranian authorities every month,” read the report.

In its monthly report, Iran HRM also gave details of the regime’s use of torture against detained activists especially the detainees of the Iran protests in November and January.

“Reports in January indicate that the mistreatment and torture of prisoners and human rights activists in Iranian prisons has increased. According to reports, many of those arrested during peaceful protesters in November 2019 are currently under severe torture by security forces. The monthly report of Iran Human Rights Monitor – January 2020 briefly glances over human rights conditions in Iran over the past month,” read the report.

“Reports also show that prisoners in the Greater Tehran Prison are under torture. Prisoners are beaten in their testicles and scalded with boiling water. Security and intelligence forces prevent news on the condition of detainees from leaking out of prison. Only people and forces with special clearances are allowed to go to the cells of detained protesters. One of the detainees who was recently released from prison compared prison conditions to ‘hell’,” the report added.

Citing Amnesty International’s “shocking reports” about sexual assault of a woman, detained in January for participating in protests following the downing of the Ukrainian plane in Tehran, Iran HRM wrote: “Amnesty International said one of the detainees was a woman, who was taken to a police station and sexually assaulted by a security agent.”

In another part of its monthly report, Iran HRM wrote about the ongoing violation of the freedom of expression by the regime. “A number of civil rights activists, teachers and academic activists were sentenced to heavy prison terms and flogging in January,” read the report.

“A number of teachers in the northeastern city of Mashhad including Mohammad Reza Ramezanzadeh, Hossein Ramezanpour, Hamidreza Rajaei, Ali Forutan, Mostafa Robati, Saied Haghparast and Hassan Johari who were detained in October and November 2018 and were later released on bail were sentenced to prison in January. They were sentenced to overall 41 years and eight months of prison, 222 lashes and a 3 million toman fine,” the report added.

Iran HRM also referred to the regime’s violation of rights of the ethnic and religious minorities.

“Members of Iran’s Baha’i minority would face further discrimination with the news rule which requires citizens to register their religion. The card is used for all government services, banking activities and the vast majority of other transactions in Iran. Meanwhile, 12 members of Baha’i minority were taken to prison to begin serving their sentences. Iran has bulldozed over the grave of a pastor who was executed by the regime in 1990 for leaving Islam for Christianity,” read the report.

“Rev Hossein Soodmand, who converted before the 1979 Islamic Revolution, was arrested and tortured before being hanged after a sharia court convicted him of apostasy. There is no information on the whereabouts of Fatemeh (Mary) Mohammadi, an Iranian Christian who was arrested on January 12, 2020. Iranian authorities have not provided any information regarding her whereabouts and well-being since January 12, when she was arrested in Tehran’s Azadi Square,” the report added.

This report once again highlights the need for the international community to send a fact-finding mission to Iran to prevent the regime from further violation of human rights. European countries should condition their relationship with the Iranian regime to an end to human rights violations in Iran.

Previous articleIran Protests: The Iranian Regime’s Judiciary, Sentenced Eight Political Activists, to a Total of 72 Years in Prison
Next articleStruan Stevenson – Iran Protests Are the Lull Before the Storm