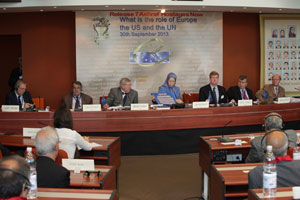 Urgent need for EU, U.S. and UN to secure release of seven hostages of Ashraf and stationing at Camp Liberty of UNAMI observing team and UN Blue Helmets

In her speech, Mrs. Rajavi warned of the dangers of a new phase of oppression against the Iranian people by the regime ruling Iran, saying: “The Iranian regime is extremely vulnerable to widespread popular discontent, threat of large-scale social upheavals, and deep economic crises. International sanctions have exacerbated this vulnerability. This regime is currently on the path to its overthrow. The intensification of the regime’s internal power struggle reflects this condition.

“If the regime were to retreat when it comes to the three core issues of human rights violations, the nuclear weapons project, and the export of terrorism and fundamentalism, this would lead to its rapid disintegration. The regime’s abandonment of any of these policies would bring the best news for us and for our people.”

The clerical regime has resorted to a new phase of suppression and barbarism. Waves of opposition and commensurate executions in cities throughout the country, including the execution of over 200 prisoners following the sham election — 22 of whom were executed in the three days that Rouhani was giving lectures in New York on the need to abandon violence and be democratic — is part and parcel of the infamous lies of this corrupt regime. 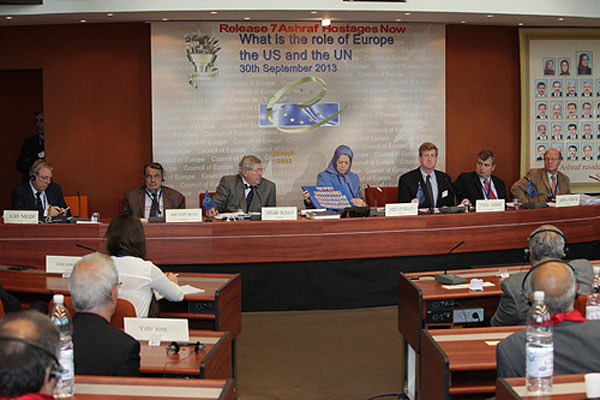 President of the Iranian Resistance said: The most recent example of this policy was the attack by the regime’s puppet government in Iraq against Camp Ashraf, which included the mass execution of 52 members of PMOI and the hostage taking of seven more. Maliki and his Security Advisor Faleh Fayadh plan to create their own scenarios by denying their responsibility in the mass execution of Ashraf residents, refuting the attack took place at all, and denying the hostage-taking. Such a vulgar scenario is an insult to human intelligence. This is while since 2009 –following transfer of Ashraf protection to the government of Iraq — they have staged such a siege on Ashraf to the effect that not one person other than Iraqi government’s officers have been able to enter Ashraf.

The tactics of Maliki and Faleh Fayaz is to create havoc for on the hostages by constantly moving them around such that when the address of one prison is revealed and the UN demands a visit, the prison would be empty, allowing the Iraqis to claim the hostages are not in their hands.
Mrs. Rajavi emphasized that because of the information we have given to UN and U.S., they know well that the attack on Ashraf was carried out by Maliki and that the hostages are also in his hands. If they want and if they decide to live up to their repeated and constant commitments concerning safety and security of the residents, they can question Maliki and obligate him to keep to his international commitments which would lead to the expeditious release of the hostages or to handing them over to a European country. 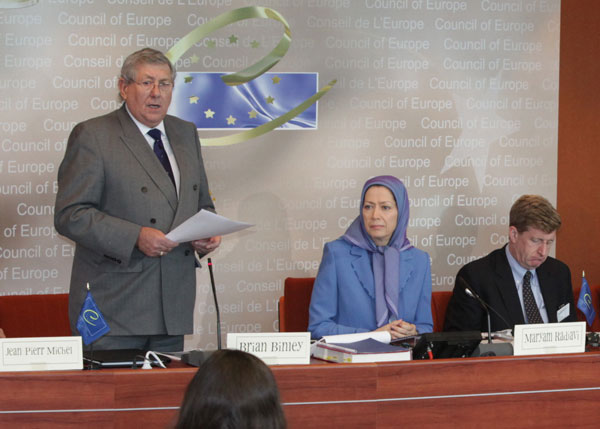 Speakers and participants in the conference underscored on the following points:

1. The condemnation of the heightened and systematic violation of human rights in Iran, especially of the arbitrary executions that have taken on an added dimension since the presidency of Rouhani. Participants implored member states to ensure that their relationship with the clerical regime was dependent upon the improvement of human rights and the cessation of executions.

2. To continue the need to maintain a firm policy toward the Iranian regime by enforcing sanctions whilst ruling out any concessions. The meeting Conference voiced approval of Mrs. Rajavi’s five indicators for regime change in Iran published last June which was: The releasing of all political prisoners, freedom for all political parties, freedom of expression, termination of the nuclear weapons project, and ending interference in the region, in particular in Syria and Iraq. Participants added that one-hundred days after election of President Rouhani there is no sign of any of these indicators coming to fruition.

3. the meeting called upon Council and member states to demand that the government of Iraq freed the hostages taken at Ashraf and to review their relation with Iraq should these demands not be met.

4. That A UN monitoring team together with a Blue Helmet unit must be stationed in and around Camp Liberty at all times.
5. Furthermore the Secretary-General and the High Commissioner for Human Rights should conduct an independent investigation into the September 1st atrocity and bring the perpetrators to justice.

6. Member states should find ways of accepting Liberty residents. Delays by European countries in this matter,especially that of refusing to admit 900 residents who are refugees in their countries, is shameful and should be ended.

7. The Parliamentary Assembly of the Council of Europe should appoint a Rapporteur to conduct an independent probe which could help to end harassment, violence, and murder perpetrated against both Iranians in exile and in Iran.

8. The meeting expressed solidarity with Camp Liberty residents who are on hunger strike in protest at the massacre of September 1 in Ashraf and taking of their seven colleagues hostage together with those in various countries throughout the world who are staging sit-ins in support of Camp Liberty residents, emphazing that they will spare no efforts to ensure the release of the hostages and the safety of the residents of Camp Liberty.