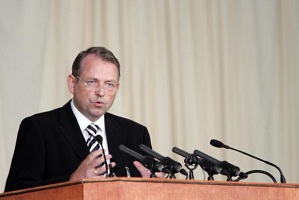 NCRI – Former Member of the Norwegian Parliament from Oslo, Lars Rise has demanded an urgent investigation into the Camp Ashraf massacre – but said the ‘principal suspect’ Iraq must have no part in it.

Lars Rise also condemned the complete lack of democracy or the rule of law in Iraq more than ten years after the invasion by US and allied forces.

Mr Rise told a conference held by the British Parliamentary Committee for Iran Freedom: “We are completely shocked by the horrible events which took place in the early morning of 1st September.

“What made the most impression on me was to see the picture from the medical centre, to see that they had first shot them and didn’t manage to kill and then they went into the medical treatment room and actually assassinated the people in the beds.

“It is a very serious crime against humanity and there is of course a very strong need for an impartial investigation.”

“When we look at Iraq ten years after the speech of George Bush here in London… all the Western Foreign Ministries seem to be completely impotent or incapable of executing any kind of power.

“They just say to the Iraqi government, please will you investigate this ?   This is so shocking, to see how they can go to a suspect and ask them to investigate.

“And we especially think of the seven hostages and how they can be saved.   We all have a responsibility to do our utmost to secure their safety and their lives.”