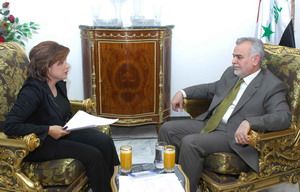 NCRI – Iraq’s vice-president said in an interview that Nouri al-Maliki is ‘personally responsible’ for the Camp Ashraf massacre and the abduction of seven hostages.

Dr Tariq al-Hashemi also blamed al-Maliki for murdering his own population, including ethnic and sectarian ‘cleansing’ of Sunni Arabs in Baghdad.

He told the Kuwaiti daily newspaper Alsiyassa on Saturday: “The armed forces only ever act on the orders of the commander in chief of the armed forces or militia. He is the one that allows them to operate.

“Al-Battat and Assaeb al-Haqe paramilitaries march in Baghdad while armed under the protection of Nouri al-Maliki . If the militias or armed forces carry an attack, it is because they have taken orders from prime minister Nouri al-Maliki.

“Claims of a lack of responsibility are a lie, but thank God no one in the Arab or international community buys that.

“Al-Maliki was involved in killing those innocent people, just as he is involved in the ethnic and sectarian cleansing of Sunni Arabs in Baghdad.

“Al-Maliki is 100 percent involved in all crimes inside Iraq, either in Camp Ashraf or against innocent Iraqis.”

Dr al-Hashemi also defended the right of Camp Liberty residents to demand the protection of UN Blue Helmets which the Iranian opposition hunger strikes in 6 countries have been calling for.

He added: “This is a legitimate right, it is their right to demand it. Is it reasonable that the international community witnesses the killing of these innocent people and only Ban Ki-moon condemns what happened?

“And worse than that is asking their killers and Nouri al-Maliki to investigate the killing in Camp Ashraf. Frankly, I’m surprised that the Secretary-General of the United Nations requested a person accused of murder to investigate and give him the results of the investigation.

“Nouri al-Maliki will never investigate and will not provide you with the facts about that because he was involved personally in killing of these innocent people.”