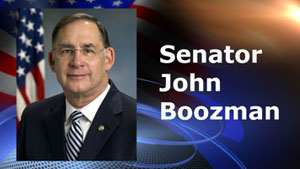 NCRI – U.S. Senator John Boozman has called for the immediate release of all those taken hostage during the September 1 horrific attack on Iranian dissidents in Camp Ashraf.

” I strongly condemn the mass executions of innocent residents of Camp Ashraf and call for the immediate release of any hostages taken during that event,” said the statement published in Senator Boozman’s website.

The statement also urged for an independent investigation by the United Nations into the attack on Camp Ashraf.

“This tragic event is a perfect of example of how our responsibilities do not end even long after the military intervention is over. The US and the rest of the international community have an obligation to ensure that whoever is responsible for these murders are held accountable and that any and all hostages are immediately released” the statement said.

Previous articleIran: IRGC warns of dangers of dealing with U.S.
Next articleIran: 12 prisoners hanged in the past two days in Iran