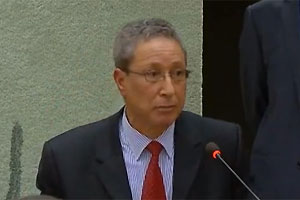 NCRI – Dr. Tahar Boumdera, ex-senior UN official in Iraq in charge of Camp Ashraf, speaking in a conference at the UN headquarter in Geneva on September 20 said described the September 1 massacre at Camp Ashraf as ‘predictable and preventable’ tragedy for which ‘it is time to hold UN accountable.’

The massacre at Camp Ashraf “was done by the Iraqi Army coordinated by the Prime Minister’s office ordered by Falleh Fayaz the National Security adviser,” Mr. Boumedra said.

Below is the text and video of the speech by Dr. Tahar Boumedra, the former head of Human Rights office of the United Nation’s Assistance Mission for Iraq (UNAMI) and in charge of Camp Ashraf file:

I would like to share with you some realities of Ashraf and the situation in Iraq and I would like you to draw your own conclusions from what you will hear.
I was the lead person on the Ashraf file and I was also the advisor to the Special representative to the Secretary General in Baghdad. I was visiting Ashraf every week and when I arrived to Ashraf before we land I always ask the pilot to hover around Ashraf so that I can see closely the whereabouts of everybody and who is doing what.

And I could tell you that Ashraf is highly fortified camp where nobody could penetrate into the camp without the active preparation and support of the Iraqi Police and Army.

I got to make a joke with one of the officers and told him how many folks have crossed the sand into Ashraf. They know the little details.

There are observation towers in every corner of the camp in the south in the East and also in the North. After the events of April 2011 the Iraqi forces took 40% of the northern side of Ashraf and built this berm which crosses Ashraf from East to West 5 meters high and BMPs these infantry mechanized tanks were placed on top of these berms.

With the tanks directed to the residential areas every little detail is observed on a hourly basis nothing could go into Ashraf without being seen and the officers of the Military Police have full powers. Their powers override the Police. There is a battalion of Police in Ashraf and a battalion mechanized infantry and the captain in charge of the Military Police is the one in charge and he gives orders to colonels who are in charge of the Police and the Army. So the Ministry Police is in fact in charge of camp Ashraf since 2009. Now when I hear that there is doubt raised about who did it, it shocks me. It shocks me because I know exactly the mechanism how it is done. They did it in 2011 and it was me who did the fact finding and I talked directly to those who committed the crime in April of 2011. They tried to put the blame on the Ashrafis but in the end they recognized that they did it.

My counterparts in the American embassy also tried to hide the realities but they told me you know the situation got out of hand and the Iraqi Army could not sort of monitor the situation closely. They went into Ashraf on the 10th of April and did not inform me because there are some convention working arrangements that we inform each other and I went to Ashraf on 13 of April and found out that the Americans had been there before me and they did not say anything and kept quite.

The report about the massacre of April 2011 was sent here to Geneva in irregular manner because I was not allowed to send in the report through the normal channels. That means if I don’t send it in a irregular manner we would have covered it up. Now coming to first of September this last massacre Madam President [Maryam Rajavi] you remember in the ceremony of Iftar I warned and I said it is going to happen and I was not sort of guessing it is based on the information I shared with the Iraqi authorities.

They did share a lot of information with me including the facts that they will do this thing attacking and eventually extraditing any number of them.

Let me very briefly Mrs. President also brief you on how things are done in UNAMI. So for you to understand that there is nothing that happened to the Ashrafis that is a secret to UNAMI. Look at the institutions of UNAMI which section deals with the situation of security there are three institutions within UNAMI. The first one is called POLAC. POLAC is an institution of the Police that advises UNAMI on security from the Police side. Second institution is MILAD.

So I am surprised that the statements made pretending that there is a doubt who did it. There is no doubt and I could confirm in this meeting and I hope that the Press or the UN personnel in this room would challenge what I am saying. I am telling you that it was done by the Iraqi Army coordinated by the Prime Minister’s office ordered by Falleh Fayaz the National Security adviser.

Now where are the abducted seven people? Here again it is not a secret there is no way for UNAMI not to know. There is no way for the American embassy not to know where they are. I am telling you from my experience when the 36 in 2011 were taken from Al Khalid they disappeared and I followed them where were they? They were in Baghdad in the Green Zone 50 meters away from UNAMI headquarters also 50 meters from Iraqi Presidency in a building with a label on it High Council of National Education and the National Education was used as a secret prison. They kept them there. I went to visit them in the presence of the Iraqi security officers I told them now you are my neighbors and I will visit you every day. Next day I went to visit them they were removed. They were taken to the airport to a prison called Almothana.
This is a pattern of behavior that repeats itself constantly and I am telling you that UNAMI knows very well this pattern and knows also shares information with the Iraqi military apparatus and other organizations. ICRC, UNHCR know these things as well.

We used to sit down and share this information on a daily basis among ourselves and with the diplomatic community.

So things are clear the responsibilities are clear and it is time it is really time to hold UN accountable for what is happening because I do not believe that they do not know.
I said in last August that this is predictable and preventable. Nothing had been done we witnessed a crime against humanity and account must be done. Thank you very much for your attention.