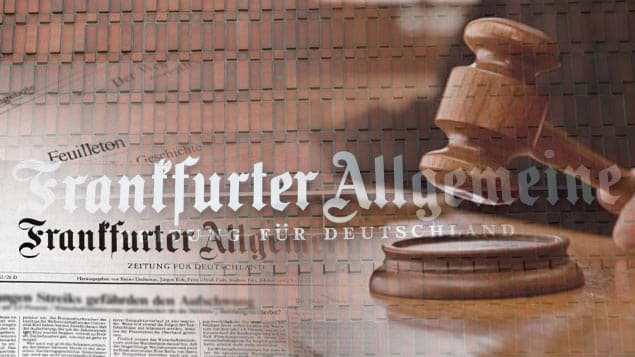 The German newspaper Frankfurter Allgemeine Zeitung (FAZ) accepted the second ruling in a German court banning the publication of defamation against the People’s Mojahedin Organization of Iran (PMOI/MEK) as a final and binding ruling. The ruling and the full acceptance of the sentence by the FAZ is a major legal and political victory for the Iranian resistant in its fight against the demonization campaign by the Iranian regime.

It is clear that the clerical regime, with all the tremendous investments it has made to demonize the MEK and with the current balance of power, will never give up such filthy acts. It will try to continue its demonization campaign from different channels to prepare the ground for terrorism and crime at the expense of the deprived Iranian people.

Prof. Dr. Gero Himmelsbach, a prominent press lawyer, who represented the National Council of Resistance of Iran (NCRI) in this legal case, recently spoke at a conference held by the NCRI’s representative office in Germany. He said: “As early as March 2019, the Hamburg district court banned Spiegel from saying that there was torture in the [MEK] camp in Albania. Spiegel had relied on alleged statements by so-called ‘MEK defectors’. In the court proceedings, these claims no longer mattered at all. Spiegel recognized the injunction and closed the proceedings. The FAZ jumped on the same train about a year later. The FAZ said on May 13, 2020, about alleged events in the Albanian camp of the People’s Mojahedin. It claimed that ‘defectors,’ report about torture at the MEK. Now the allegation of alleged torture in the Albanian camp, which had previously been legally forbidden in Spiegel, has now been brought to the public by the FAZ. The Hamburg Regional Court also forbade the FAZ to make these claims. The FAZ, however, did not want to accept the ban. Thus, it appealed and demanded an oral hearing in Hamburg. By submitting affidavits, we have proven in the proceedings that the allegation of torture in the Albanian camp is completely unfounded. In addition, it was proven in the proceedings that the alleged informants of Spiegel and FAZ, or the so-called ‘MEK defectors’, are controlled by the Iranian Secret Service, the MOIS.”

Demonizing the Iranian opposition is the other side to regime's #terrorism schemes abroad pic.twitter.com/oYa1K8Qgww

The Iranian regime’s isolation, particularly after the popular uprisings in 2018 and 2019, and the MEK’s role in organizing these protests prompted the regime to resort to more terrorism on one hand and demonization of the MEK on the other hand. One example is the arrest of the regime’s “diplomat-terrorist,” Assadollah Assadi, and his trial for giving a bomb to the regime’s agents for targeting Iranian’s grand gathering in Paris in 2018.

On other hand, the Iranian regime intensified its demonization of the MEK by spending billions of dollars. The purpose of the regime’s demonization campaign was to portray that the Iranian Resistance has no popular support inside Iran and therefore the regime has no alternative. Thus, the international community has no choice but to engage with the current regime, and continue the appeasement policy.

German court ruling proves once again that the source of all lies and fake news against the Iranian resistance is the mullahs’ regime.

On February 4, a court in Antwerp, Belgium handed down its verdict in the case of Iran’s incarcerated diplomat-terrorist Assadollah Assadi and his three...
Read more
editorial

On the eve of the New Year, countries around the world have mobilized all their resources for public vaccination of people. Political figures and...
Read more