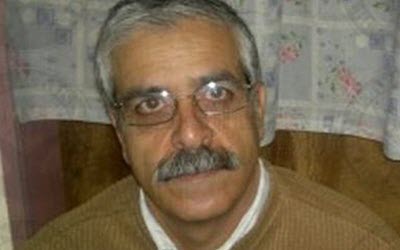 NCRI – A political prisoner of Gohardahst (Rajai Shahr) Prison and supporter of the People’s Mojahedin Organization of Iran (PMOI/MEK), Abolghasem Fooladvand, released a statement supporting the boycott of the Presidential Election in Iran.

The statement reads, “Although the faces of runners are apparently different within the circus (Presidential election), all of them are extremely devoted to the fundamentalist and terrorist regime of Iran, and they approve all the crimes and atrocities committed by this regime during the past 38 years.”

The political prisoner referred to the massacre of 1988, and he wrote, “The executions of the 90s, especially the massacre of 1988 in which 30 thousand political prisoners were executed by Khomeini’s order, are the brutal crimes committed by the regime’s authorities, including Ebrahim Raisi, Mostafa Pourmohammadi, Rafsanjani, Khatami, Mousavi, Karoubi, Rouhani, and Khamenei.

By looking closely at the face of these criminals, we conclude that there is no difference among the principlists’ and the reformists’ factions, the National Freedom Movement, and those opportunists called the Council of Nationalist-Religious Activists, since all of them are devoted to the Guardianship of the Islamic Jurist. These factions officially pledge their support for the regime, because they only struggle for power and plunder. They will commit all sorts of crime in order to fulfill their objectives.”

Abolghasem Fooladvand stated, “According to Khamenei’s speech and the remarks made by his representative, Ahmad Alamolhoda in Mashhad, it is clear that no real elections take place in Iran and Khamenei has decided to repress the people. Therefore, the regime resorted to the mercenary, Ebrahim Raisi, in order to fuel fear in the society. Alamolhoda said, ‘If 90% of the people select a person whom Khamenei opposes, then the views of those 90% are not counted.’ Additionally, Khamenei said, ‘The soft overthrow means the waging of war against God and this act is a capital crime.’”

The political prisoner also mentioned the resistance of Mujahedins in these years and their role as the main opponents of the regime. “The criminal Khamenei is well aware that the PMOI/MEK will never topple, since they resisted in Camp Ashraf for 14 years against the most brutal acts of the regime with the support of its international appeasers. The appeasers finally lost and a new era began. The PMOI/MEK immigrated to Albania in order to join Maryam Rajavi and her litigation movement for the massacre of 30 thousand political prisoners. This movement has spread in Iran and all over the world to overthrow the regime.”

Abolghasem Fooladvand addressed the Supreme Leader of Iran and said, “Fighting with you and your sinister regime is an honor and duty for us to eternally overthrow the anti-human regime and we will not stop doing so because our salvation, our people, and our compatriots will topple your regime.”

At the end, Abolghasem Fooladvand addressed the Iranian people, “Like many of my compatriots, I also support the invitation to boycott the sham elections in Iran while I shout, ‘Down with the principals of Velayat-e-Faqih! No to the trickster (Hassan Rouhani)! No to the executioner (Ebrahim Raisi)! My vote is to overthrow the regime.’”

Previous article
Iran: Political Prisoner Says the Harassments and Intimidations Will Not Stop Us
Next article
Iran: Economic Crisis and the Closure of Factories