NCRINational Council of Resistance of Iran
EN FR DE IT AR ES AL
HomeElection OldIran: The Inevitable Release About the Massacre of the Political Prisoners in...
Election Old

Iran: The Inevitable Release About the Massacre of the Political Prisoners in 1988 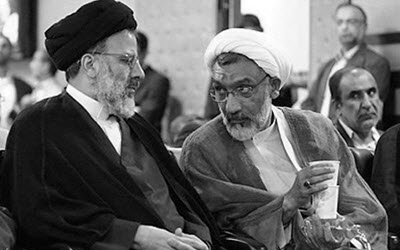 NCRI – Following the escalation of the crisis in the Iran regime because of the litigation movement stemming from the massacre of 1988, a state-run media released the text of the decree issued by the founder of the Islamic Revolution, Khomeini, addressing the Death Commission.

The state-run media defended a member of the Death Commission, Ebrahim Raisi (a Candidate for the Presidential Election), who enforced Khomeini’s decree for the genocide of the Mujahedin. The media writes, “If Raisi played a role in the execution of the Mujahedins, this issue is actually an advantage for him.”

The current Iran regime attempted to not release Khomeini’s decree, because it was a direct order to commit genocide and mass destruction for the sake of belief. Any legal authority undoubtedly would consider this decree as a crime against the humanity.

On April 18th, the state-run Afkar News released a document entitled, “The decisive agenda of Khomeini to confront and execute the Mujahedins”. The news reads, “Khomeini issued a decree to protect the country and the regime and to topple the PMOI. This order was actually a most significant and decisive one.”

According to Afkar News, Khomeini stressed in his decree that all imprisoned Mujahedins clinging to their own beliefs shall be executed. “Those who insist on their stances and beliefs are the enemies and they shall be sentenced to death. The sentence is issued in Tehran by the majority votes of the Messrs. Nayeri (the legitimate Judge), Eshraghi (the Prosecutor of Tehran), and the Ministry of Intelligence. Although caution is consensus, the majority votes of the Judge, the Prosecutor of the Revolution and the Ministry of Intelligence are mandatory in the central prisons of the country and having mercy on the enemies is naivety. The firmness of Islam against the enemies of God is undoubtedly one of the principles of the Islamic system. I hope you satisfy Allah Almighty with your hatred and anger against the enemies of Islam. Those who issue sentence shall not doubt and they have to be hard on the infidels. Any doubt in the Islamic judicial cases means trampling the blood of the martyrs,” ordered Khomeini.

The state-run Afkar News, which is affiliated with Khamenei, referred to the partnership of rivals, including Mohammad Mousavi Khoeiniha and Seyed Abdolkarim Mousavi Ardabili. The news reads, “After the decree was issued, a three-member delegation consisting of the representatives of the Prosecuting General, the Ministry of Intelligence, and the legitimate Judge were assigned to investigate the case and carry out the sentence. The legitimate Judge, Hossein Ali Nayeri; the representative of the Ministry of Intelligence, Mostafa Pourmohammadi; the deputy of Tehran Prosecutor, Ebrahim Raisi; and the Judge of Evin Prison, Morteza Eshragh; are those responsible for investigating the case of the Mujahedins in the prison. Moreover, the Chief of the Supreme Court, Mousavi Ardabili, and the Attorney-General of Iran, Mousavi Khou’iniha, also participated in making the decisions.

The state-run Afkar News then confessed to the success of the litigation movement, as well as the other crises in the Iran regime. The news reads, “As some judicial and intelligence figures of the 1990s entered the political and social arenas, the news about the mass executions of 1988 has hit the headlines once again.”

Afkar News added, “As the current Custodian and Chairman of Astan Quds Razavi, Ebrahim Raisi sought nomination in the Presidential Election of 2017, while many attempted to expose his scandal in the mass execution of 1988.

Meanwhile, some people even try to demonize Raisi’s case in the country by condemning the executions of 1988 and proclaiming the incident as a crime against the humanity. However, some reformists and supporters of the current government have forgotten that the decision-makers of those years are currently the spiritual fathers of the reformist faction.

Due to a change of ethics and values, some people are desperate to condemn or reject the effective measures imposed by the regime in the first decade of the Islamic Revolution. Although these people were actually involved in the measures, they have become regretful of their past due to the time shift.

Note that the state-run media released Khomeini’s order desperately and they have confessed to the crisis of governance and the social hatred of the regime. However, Khamenei has a fear of showing and reading the document on the state-run TV channels, since Khomeini’s order explicitly represents the crimes against the humanity. However, the promotion of justice and the commemoration of martyrs will definitely make the mercenaries respond and they need to be tried for the crimes they committed, as the President-Elect of the NCRI, Maryam Rajavi, stressed.