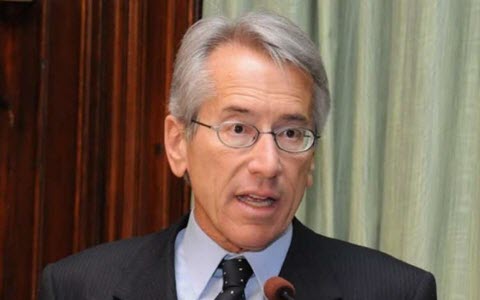 Giulio Terzi, a former Foreign Minister of Italy, is urging Western policymakers to note the growing signs of popular indifference toward the sham presidential election in Iran and the calls for boycott against the regime’s parody of democracy.

In an article for Newsweek on Monday, Mr. Terzi pointed out that major changes appear to be underway in Western policy toward the Islamic Republic of Iran.

For those who had been concerned about the conciliatory nature of President Barack Obama’s approach, there were immediate signs of hope to be seen when the new administration took over.

Barely a week after the new administration came in, Iran undertook another in a series of test launches of nuclear-capable ballistic missiles, thus violating a United Nations Security Council resolution calling upon the country to avoid such provocative gestures in the wake of the 2015 nuclear agreement.

Whereas the previous administration had essentially swept these illicit moves under the rug, the Trump White House responded by putting Tehran “on notice.”

The relevant statement also took aim at a number of other issues related to the Islamic theocracy’s role in the broader Middle East, including its use of terrorist proxies as a means of imperialist intervention.

Those concerns were further addressed last month when US Ambassador to the UN Nikki Haley spoke out during open debate on the Middle East and called upon the Security Council to put significant focus upon Iran’s nefarious regional conduct and sponsorship of terror.

Other Trump administration officials have contributed to a chorus of similar criticism and advocacy. In contrast to the previous administration, which often seemed shy about offending Tehran’s sensibilities, America’s new foreign policy leaders have had no qualms about pointing out, repeatedly and unequivocally, that Iran is the world’s leading state sponsor of terrorism and a source of instability in the local region.

The issues of terrorism and regional imperialism have rightly contributed to President Trump’s conclusion that Tehran is violating the spirit of the nuclear agreement.

In the meantime, the leading Iranian dissident group, the People’s Mojahedin Organization of Iran (MEK) recently reported that its operatives inside the country had uncovered ongoing nuclear research at the institutions that had formerly been tasked with weaponization programs. The US administration commented that it is reviewing the new information carefully.

These revelations should be a source of great concern for anyone who is worried about the instability of the Middle East or the safety of Western interests and assets. But it should also be a source of concern for those Western businesses and policymakers who have been overly eager to open up the Iranian market in the wake of the nuclear agreement.

It is in the practical interest of virtually every Western entity to continue avoiding business relations with Iran. But more than that, it is in their moral interest, because the deep integration of the Iranian Revolutionary Guard Corps into Iran’s political and economic institutions means that anyone who undertakes transactions with the country’s established industries could be unwittingly financing the IRGC and its numerous terrorist proxies.

Doing so would mean exacerbating the plight of the Iranian people, the vast majority of whom are young and educated with a tendency toward secular attitudes, in spite of the repressive, theocratic identity of the ruling regime. The mismatch between the regime and its people will no doubt be on display on May 19, when Iran holds elections for the presidency and a number of local positions.

There are growing signs of public apathy and calls for boycott of the election, recognizing that the theocratic system excludes any candidate that shows an iota of disconformity and that it prevents any election from having a serious impact on domestic or foreign policy.

And in light of the past four years’ experience with President Hassan Rouhani, it should also be clear to Western policymakers that they cannot fall victim again to the misguided optimism that led so many of them to embrace his election in 2013.

The alternative to Rouhani is a prominent hardline cleric named Ibrahim Raisi, who was a major participant in the 1988 massacre of political prisoners that sent some 30,000 prisoners, primarily activists of the People’s Mojahedin to the gallows. Since then, Raisi has only built upon that legacy of brutality.

But if he wins the forthcoming election, he can hardly do worse than the incumbent, who has overseen approximately 3,000 executions and a major crackdown on activist and journalistic activity, as well expressing unmitigated support for the Assad regime in Syria while promoting the activities of Iran-backed militant groups fighting there and throughout the world.

In light of all this, it is clear that the Trump administration understands the need to confront the Iranian regime as a whole, regardless of who happens to occupy the office of the presidency. Europe and the rest of the international community must follow suit by imposing further human rights and terrorism-related sanctions, and they must do this regardless of whether Rouhani retains his position.

Furthermore, Western policymakers and journalists would do well to turn their attention toward the growing signs of popular indifference and the calls for boycott against the regime’s parody of democracy.

Things are brewing in the streets in Iran and particularly among the youth. This is where U.S. and European focus should be, unlike what we tragically witnessed during the popular uprising of 2009.

Giulio Terzi , a former foreign minister of Italy, is a member of United Against Nuclear Iran’s Advisory Board.