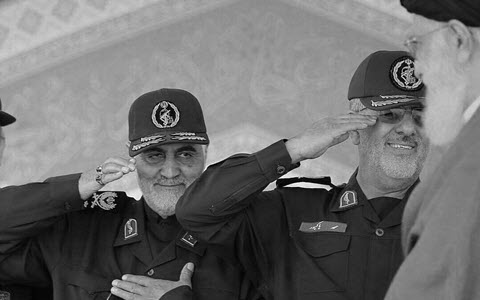 NCRI – These days’ revelations are made in the Iran presidential election campaign trail shedding light on the scope of corruption and plundering by the regime’s factions and officials.

One of the most important and institutionalized aspects of corruption is the uncontrolled import of smuggled goods that dominates large percentages of Iran’s economy. State-linked institutions, including the Revolutionary Guards (IRGC), have taken control over Iran’s ports and are meddling in customs affairs, literally transforming these economic centers to transits used to smuggled goods. The IRGC, by taking control over the country’s most important economic routes and establishing a major financial empire, has taken full control over large portions of Iran’s imports/exports.

Smuggling goods by institutions such as the IRGC is taking place at a time when most of the country’s industries, factories and production units have gone bankrupt or are on the verge of bankruptcy.

“The numbers of $15 to $20 billion of smuggled goods is not a low figure for our country; it is natural that the entrance of goods from illegal channels can deliver irrecoverable damages. From an economic point of view the uncontrolled entrance of smuggled goods will lead to the end of the country’s domestic production, and this could have meant jobs for 2 million people,” according to a report wired on May 5th by the semi-official Tasnim news agency.

Based on the authority Iranian Supreme Leader Ali Khamenei has entitled the IRGC, the commanders can use ports and the country’s ground/air borders for whatever means needed without paying a dime in customs, all in order to independently finance the IRGC’s needs to continue exporting terrorism and fundamentalism. The IRGC’s imports and exports from these ports is evaluated at nearly $12 billion each year.

“For the first time the ISNA news agency issued a report in 2012 titled ‘Troubling Ports’, naming 80 illegal piers in the southern provinces of Hormozgan, Bushehr, Sistan & Baluchistan and Khuzestan, and Mazandaran in the north. Hormozagan stood out with 40 illegal ports. The IRGC uses these ports as facilities for ‘illegal imports and exports’ and producing ‘dirty money’,” according to state-run AmadNews websie.

“In the past year no measures were taken to stop goods being smuggled into the country. $25 billion in goods were smuggled into the country. Of course, the Economy Minister said we have confronted the smuggling phenomenon and it has reached $15 billion through customs. However, the truth is that today’s $25 billion has reached $35 billion,” according to Ahmad Salek, a member of Khamenei’s faction.

Even if we accept the $15 billion figure placed forward last year by the so-called Anti-Smuggling Department, this is a huge figure for a country that had an import of $40 billion last year. This means around 40% of the country’s official imports were through smuggled channels.

In this regard referring to the numbers provided by state-run sources and confessions by the regime’s own officials a deeper understanding is gained over the institutionalized nature of smuggling in Iran, and its destructive potential on Iran’s economy.

“We have heard that 4,000 trucks and containers are entering the country through the Bandar Abbas port, while only 1,500 of these containers are controlled and inspected,” said Mohammad Jafar Montazeri, a senior judiciary official.

“Why are the borders impenetrable for ISIS but open to thousands of flat-bed trucks bringing in smuggled goods?” asked former regime commerce minister Yahiya Al Es’hagh.
“Estimates show $20 to $25 billion in goods are smuggled into the country each year…” according to Mohammad Reza Pour-Ebrahimi, Chair of the Iranian Parliament Economic Commission. (Semi-official Fars news agency – April 5, 2017)

“Lack of oversight and transparency over the economic activities of free zones has transformed these zones into cliffs for the country’s production and employment. Each year $18 to $25 billion in goods are smuggled into the country, leading to the loss of 2 million job opportunities… the spokesman of the Anti-Smuggling Department said one fourth of the country’s imported goods are smuggled,” according to a reported posted by the state-run ‘Ruydad 24’ website on April 10th.

To this end, what is taking place is far beyond a catastrophe. Such a phenomenon has enormously destructive impacts, including higher unemployment, a production halt and loss of jobs…

Previous articlePolitical Prisoners in Southeast Iran Issue Statement on Farce Presidential Election
Next articleIran Regime’s Presidential Candidate:’4% of Population in Today’s Iran Are Rich While the Remaining 96% Are Poor”