Joseph Lieberman: There Is No Election in Iran, the Regime Decides for Iranians 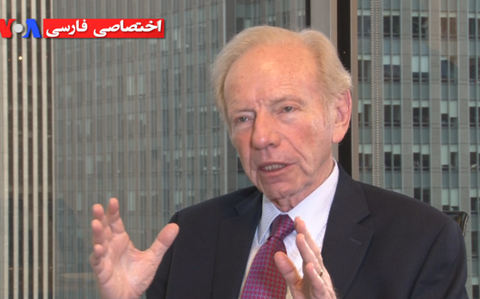 NCRI – The Prominent politician and former United States Senator from Connecticut, Joseph Lieberman, believes that a brief comparison of what is happening in the Iranian election with America and France indicates a true Iranian election would not be held. He indicated that the results are initially a decision that regime will make. Lieberman has served as a U.S. senator and vice presidential candidate.

Q: In the report of United Against Nuclear Iran, it has been pointed out that in the ongoing Iran’s presidential election voters have no options, because the 6 candidates are so-called soldiers loyal to the regime and in this show no matter which one wins, it guarantees regime’s safety. Can you explain more?

A: This is not an election. We have recently witnessed elections in France and America. But in Iran, from over 1,600 candidates, only 6 nominees were selected. The regime in Iran decides who should be the nominee, not the people.

Once you look carefully, there is no great difference between these six persons. Rouhani wants and tries hard to introduce himself as moderate, but as you have seen during his reign of power in Iran, he was staunch supporter of Assad’s regime in Syria. Assad is not only slaughtering his own people, but also committing crimes against humanity.

Iran is involved in Yemen’s war and, according to our State Department, Iran is the number one state sponsor of terrorism. It suppresses internal dissents, even more in Rouhani’s period. So, this election will change nothing, because the Iranian regime is based on supreme leader. Ayatollah Khamenei is the supreme leader and controls everything. Presidents come and go. It is Ayatollah Khamenei who decides and does not change. Even after JCPOA, according to them, Iran has remained hostile to America.

Q: You mentioned Iran’s nuclear deal, which is apparently a hot topic in Iran’s ongoing election campaign. The Americans who favored the nuclear agreement were hoping that Iran somehow changes its behavior and the Iranians who favored nuclear agreement were hoping somehow to get some economic benefits. However, none of these things happened. Why? Was there a mistake?

A: Obama’s biggest miscalculation was that he thought JCPOA would change our relations with Iran and Iran would become America’s friend or at least would stop supporting terrorism and militancy in the Middle East. However, we did see that even when the negotiations were in progress, Iran’s supreme leader said that this accord won’t change anything. We have seen that things not only haven’t improved, but have become worse than before. This is shameful.

Now, there has been a significant change in America. I am one who supported Hillary Clinton in the last American election, but Trump’s election has changed the Obama era into much different world. Obama did consume too much time and paid a heavy price for the nuclear accord and did not regard Iran’s infractions and misuses as a sign of things to come. He even went far enough to bribe Iran in order to get them to sign that accord.

But Trump has completely different attitude and perception. He wants to have complete control over Iran’s behavior. Any sanctions proposed by the Congress, he will sign them. Of course, if we want to place our judgements according to the government’s slogans. Although the slogans are not militancy, but at the same time they are sharp. I hope Trump continues to rigorously to impose sanctions and acts powerfully towards the Iranian government. Give them only things they deserve to have.

Q: United Against Nuclear Iran has warned investors about the risks of investing in Iran. What information do you have about them? How have the investors responded?

A: American, European and Asian investors and traders must again be informed that deals with Iran are still dangerous. It is risky because the sanctions are not completely lifted and human rights issues and terrorism are there as well.

Another issue is that since the nuclear agreement’s signature about a year ago, many things have changed. Trump was selected and may take actions to oust us from the deal.
Then, our civil duties are dictating that we confute organizations and trading institutions to not be supportive of a regime that is executing its political opponents. Additionally, customers won’t be satisfied either.

Various surveys have indicated that Americans have taken Iran’s threats much more seriously than even North Korea or China just after ISIS and AlQaida., 60% of Americans have said in those surveys that they won’t purchase goods and services from companies that deal with Iran because Iran is their enemy.

Q: I want to ask about the Boeing’s deal. If the deal is cancelled, don’t you think in this case that there may be a multibillion dollar deal lost, along with tens of thousands of jobs lost in America? It does not make you worry that such alerts may help European competitors and companies to harm Boeing?

A: Sometimes a company or a country recognizes that ethics are more important than financial gain and income. Boeing says: Iran Air is a commercial airline. But we know that Iran Air is transporting IRGC troops, weapons and military equipment to Syria, which is being used in a devastating war. Therefore, Boeing will benefit more, in my opinion, by not dealing with Iran, because dealing with Iran causes Boeing to lose its credibility and results in others choosing not to deal with it.

Q: Of course, Iran’s missile program is a matter of concern. Hassan Rouhani, the president of Iran, has criticized the IRGC in the recent presidential debates for openly demonstrating their ballistic missile power, but a month ago, the same Rouhani mentioned: We won’t obtain permission from anyone for our missile program. What is your opinion about such statements? Does it mean that if the missile program does run into hiding, that would be okay?

Q: You did mention Israel. You do not wonder that Iran, even after nuclear agreement, is continuing its anti-Israeli policy and the continued denial of the Holocaust? Do you really think that Iran with such policies and not allowing Iranians to visit Israel could again join the international community?

A: This is a very important point. The Iranian government hostility towards Israel is another indication which shows that even after the nuclear deal, nothing has been changed. My reaction is bleak, but not surprising. Taking these sorts of positions towards Israel and the Holocaust denial will cause Iran to be much less acceptable and respected in the world community. It is very surprising that regimes, such as Russia, are dealing with Iran.

This position is a bit humorous and ridiculous. It seems that Iran and Israel, over the years and before that for centuries, had relationships with Jewish people that benefited both nations. But as long as this extremist regime is in office, those kind of relationships won’t be established.