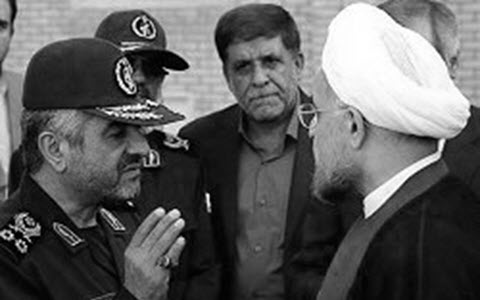 NCRI – The most recent consequences of the gang clashes following the astronomical frauds during the sham presidential election are threats to eliminate Rouhani, the regime’s president and attacks against the official television, affiliated to Khamenei.
Javad Abtahi member of Majlis: “I warn the Judiciary to handle the reports of the election’s contravention with firmness and without connivance. If the governor, governor-general or other authority, has acted over his jurisdiction, misusing his position and powers, he shall be immediately put on trial and the result should be announced to the people.

I warn the president to reconsider his words in order to avoid use of norm-breaking statements, there is no confraternity, If he wouldn’t consider the system’s redlines, people will reconsider their votes and there are historical events like that which I hope wouldn’t happen”. (Radio Farhang 28th of mai)

Masoumeh Agha Pour another member of Majlis: “A first notice should be given to Mr. Ali Asghari Chief of the National Television; the election and its competitions are over, stop partiality and being unidirectional” (same source)
Abdol Hamid Khezri member of Majlis: “I recommend our friends to consider electoral competitions over. We have passed the election. Encouraging a political dipole and dividing people’s vote to legit or no legit is against the National interest and in contradiction with the Supreme Leader’s sayings (Khamenei).” (Same source)

Ali Najafi Khosroodi, member of Majlis: “Some shouldn’t create division and anxiety among people; instead, in the current crucial regional and international situation, they should contribute to national unity and solidarity. (Same source)

The state-run Ebtekar agency, in an article, by the “president of the National election center” wrote: Calling the people’s vote legit or no legit is an insult to them.” He continued: “why should we divert the public attention and those eyes fixed on us from outside by considering some reports which have no effect on the election results. When we spread this notion through the public opinion, some will do deviltry by taking those words and claiming whether there have been electoral contraventions in the past. This certainly has consequences for our country and revolution.”

Previous articleIran: Factional Disputes Continuing Over Presidential Election Vote Rigging
Next articleIran: 200,000 Children Under the Age of 6 Suffering From Malnutrition