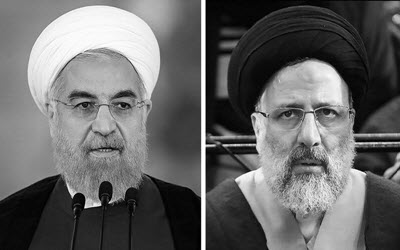 In an article titled “Iran’s Elections: Black Turbans vs. White Turbans” which was published on ‘Gatestone institute’ website in April 17, 2017
The author, Mohammad Amin, who is an expert in Iranian international affairs, and a fellow researcher at the Foundation of Studies for the Middle East (FEMO) in Paris, examines the upcoming presidential election in Iran, the following are excerpts from this article.

The presidential elections in Iran, scheduled for May 19, have observers questioning whether or not the “white turban” incumbent, Hassan Rouhani, can retain his position, or be defeated by his possible challenger, the “black turban” Mullah, Ebrahim Raisi, acknowledged for his key role in the 1988 massacre of over thirty,000 political prisoners.

Iran’s elections have observers questioning whether or not the “white turban” incumbent, Hassan Rouhani (left), can retain his position or be defeated by his probably challenger, Ebrahim Raisi (right), the “black turban” Mullah. (Images source: Wikimedia Commons).

More significantly, the question on Western minds is however and in what approach the Iranian regime is going to be plagued by either outcome.
The two periods in Iran’s recent history that require to be examined so as to answer this question are that of the tenure of former firebrand President Mahmoud Ahmadinejad (2005 to 2013), who also declared he’s running once more, and the one that has followed under Rouhani.

At the commencement of the Ahmadinejad era, Iran’s GDP (using purchasing power parity) soared beyond $1 trillion, and two of the country’s greatest threats — Iraq under Saddam Hussein and Afghanistan under the Taliban — were eliminated. Both enabled Iranian Supreme Leader Ali Khamenei to solidify his stronghold.

Midway through this period, however, Iran’s economy fell sharply. Iran became the country with the fifth highest inflation rate in the world. Iran fell into a serious recession, and millions of Iranians found themselves unemployed. All this was going on even before the international community imposed sanctions on the regime in Tehran.

In the years that followed Ahmadinejad’s replacement by the so-called “moderate” Rouhani, sanctions were lifted; oil exports reached pre-sanction levels; billions of dollars’ worth of assets abroad were unfrozen; and hundreds of agreements were signed to expand business transactions with the West.

Iran’s economic crises mirrored its political ones. Despite a series of measures that the West imagined would usher in a new era, the opposite happened.

Indeed, although Iran signed the Joint Comprehensive Plan of Action (JCPOA) with world powers in July 2015 — and then-U.S. President Barack Obama persisted in attempts at easing tensions — the regime in Tehran, exceeding its own 30-year record, outdid itself in fundamentalist activities.

More than 3,000 executions of Iranians, for “crimes” such as “insulting Islam,” have taken place under Rouhani; Iran got involved in three Middle East wars — in Syria, Iraq and Yemen; and the regime’s semi-official Mehr news agency said that the Rouhani government has done more to advance strategic weapons development recently than in the past decade.

All of the above indicates that any distinction between “extremists” and “moderates” in Iran’s political establishment is false. As former U.S. Secretary of State Henry Kissinger famously put it: “An Iranian moderate is one who has run out of ammunition.”

This is still true, which means that whatever the results of the upcoming Iranian elections, there will be no shift in Tehran’s human rights violations or core aims of regional hegemony and pursuit of nuclear weapons.

In the event of a Rouhani victory, the country’s economy will remain crippled as factional disputes continue and divisions widen.

If Raisi becomes president, Khamenei and the Islamic Revolutionary Guards Corps (IRGC) will tighten their grip on the economy, thereby causing an even greater depression as they allocate the bulk of the country’s coffers to fuel regional wars and fund global terrorism.

As the late leader of the Communist Party of China, Deng Xiaoping, said during a speech in 1962: “It doesn’t matter whether the cat is black or white, as long as it catches mice.”

What does matter is the behavior of the West, particularly the United States, in the near future. If it again resorts to cooperating with Iranian-backed forces in Iraq and Syria, Khamenei will not only be able to pursue his regional and global interests unfettered, but will be better equipped to contain crises at home.

If, on the other hand, the U.S. adopts a policy of ending Tehran’s Middle East meddling (as its missile strike a Syrian regime airbase on April 6 indicates it might), the Islamic Republic’s domestic powder keg could explode, spelling disaster for the mullah-led regime, no matter which candidate wins the presidency.