Grand Gathering of the Iranian Resistance in Paris on July 1, 2017 and the Role of Muslims in Fight Against Terrorism 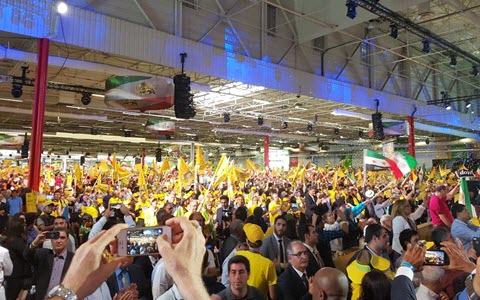 NCRI – Following two recent terrorists attacks in the United Kingdom, people are on edge and other countries in Europe are nervous. There has been a huge outpouring of solidarity, but it must be remembered that the people of Britain and the rest of Europe must be vigilant. Wrote Antonio Stango is President of the Italian League of Human Rights in ‘ Vocaleurope’ on June 16, 2017, the following are excerpts from this article.

Thankfully, most of Western society is receptive to counterterrorism efforts but there are still those who fight out against them.
Unfortunately there is a part of society that has demonised Muslims because of attacks carried out by extremists. It must be remembered by these people that the moderate Muslims are the people that are able to help the most in stopping vulnerable ones from turning to fundamentalism. They are the ones that can prove to the vulnerable people that modern Islam is in fact compatible with modern democracy.

Europe as a whole has condemned the attacks. Europe as a whole has made it clear that terrorism has no place in society. It has also made it clear that those involved with be found and dealt with.
Europe has a place for its Muslim communities. Anyone who respects their place in society has a place in Europe, but the Islamic extremists like to try and convince Muslims that Europe would like rid of them. They also attempt to convince them that their religion cannot fit into European culture. However, this is completely false because Muslims are living all over the West with no problems – religious or otherwise.

The Muslims in Europe enjoy democracy. They have a voice. They want Muslim majority countries to experience the same freedoms and democracy.

In Paris, on 1st July, the National Council of Resistance of Iran (NCRI) will be holding its annual meeting where this will be the central topic. More than 100,000 people are expected to attend to show their support for its call for regime change. The Muslims in the NCRI are sickened by the terrorism that Iran has perpetrated.

The President of the opposition has outlined a plan for Iran’s future. It is based on democratic elections and the separation of religion and state. It also requires that Muslim societies align, generally speaking, with the principles of democratic countries.

The majority of Muslims in Europe have, for the most part, achieved this and participate in all areas of society and work as hard as everyone else to counteract messages that undermine this.

At the NCRI rally, Muslims and non-Muslims from near and afar will gather to represent their communities, to campaign for freedom in their homeland and to defend freedom in their communities. At the rally we will hear voices that condemn the evil ideologies and we will see people from different backgrounds and with different religious views stand together vowing to fight terrorism together.