The Names of 5,049 1988 Massacred MEK Members and Supporters in Iran 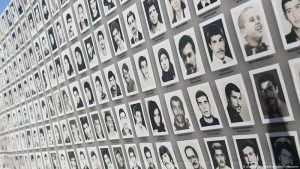 The data in the following pages include the names of 5,049 members and supporters of the Mujahedin-e Khalq (PMOI / MEK) executed in 1988. Although this list encompasses only a portion of the 30,000 executed, it reflects an extent the ages, professions, and families of the martyrs and their geographical dispersion.
This list consists of 570 women and 4,464 men.
Of the 2,770 whose age at the time of execution is known, 42 were under the age of 18; they were most likely arrested during the massacre. The majority of the victims range in age from 20 to 30. Therefore, most were under the age of 18 at the time of their arrest. Dozens were also above the age of 50 when executed.
In terms of profession, 958 were university or high school students. Other than this group, the employment status of 815 others has been determined, as follows:
Of the 2,391 whose education level has been determined, the data is as follows:
Based on the birthplace, those listed were from 140 cities, which, according to the current geographic divisions, include all 31 provinces.
In addition, the list contains victims of all Iranian ethnic groups: Balouch, Arabs, Kurds, Turks, Turkmen, Bakhtiyari, Lor, Qashqai, and Taleshi.
Compiling this list has been part of a lengthy struggle of MEK against a regime that kills and suppresses to prevent the disclosure and publication of even the least information or indicators about this atrocity. We salute all those who have suffered, been imprisoned, tortured, or faced social restrictions in order to obtain this information, especially to those, including MEK member Tayebe Hayati, who gave their lives to this cause. Tayebe Hayati, born in Tehran, was imprisoned in Evin Prison from 1981 – 1988. After her release from prison, she actively participated in the collection of the information of the 1988 massacre and was later arrested and executed during this effort.

The Names of 5,049 Massacred MEK Members and Supporters