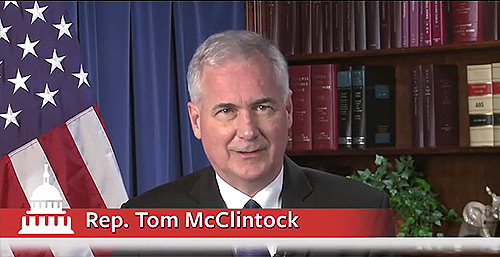 In this message, Rep. McClintock says, “Iran has been seized and subjugated by the latest incantation of Nazism with all its brutality, terrorism, genocidal intentions and expansionist ambitions. For 36 years, Iran has been submerged by this medieval dictatorship. Your movement is the light that can be seen by every Iranian throughout this dark night of tyranny.”

He also criticizes current U.S. policy of engagement toward Iran, saying, “Do not judge America by its current policy of appeasement. Americans are well aware of the fact that the fascist regime of Tehran cannot be trusted, that its hold over your country is illegitimate and that its days are numbered.”

It is time, he says, that the U.S. honors “the solemn promise of protection that the American government gave to those struggling at Camp Liberty. The Iranian Human Rights and Democracy Caucus within the U.S. House of Representatives is determined to see this happen.”

Previous articleFrance: Any Iran nuclear deal must be verifiable
Next articleFreedom in Iran is “completely attainable,” Maryam Rajavi says ahead of major opposition rally in Paris