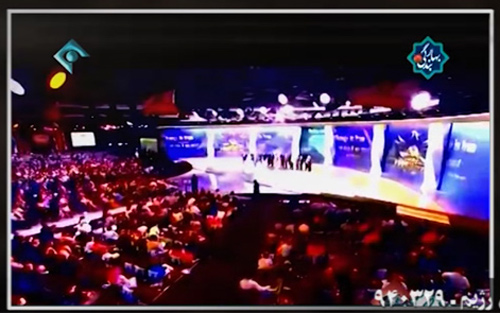 NCRI – Following the largest-ever Iran Freedom gathering organized by the Iranian opposition in Paris on June 13, 2015, Iranian state media have constantly broadcast and published reports about the event. The common themes of the state media reports has been to offer a demonizing image of the main Iranian opposition group, the People’s Mojahedin Organization of Iran (PMOI/MEK), and to discourage Iranians from supporting it. Regardless of the clerical regime’s spin in trying to dissuade the population in particular the youth to join the opposition, the impact of the organized resistance and is message is rather evident. In doing so, the regime is also showing its fear of the PMOI’s role in fomenting anti-regime sentiments among the people. Below are parts of the state media coverage in recent days.
Note: The regime’s state media use the derogatory term ‘Hypocrites’ to describe the PMOI (MEK).

in this gathering right at the time of the nuclear negotiations.

“History repeats itself at a critical juncture. Islamic Iran on Tuesday witnessed the passionate presence of the God-seeking people of Iran to bury the bodies of sea-divers who in a plot 29 years ago by the Hypocrites (PMOI) and the United States were sacrificed with their hands tied during Operation Karbala 4 (of Iran-Iraq War). Exactly three days before the memorable farewell with the most pure and noble children of Islamic Iran, the French capital Paris was once again witness to the cooperation between the West and the Hypocrites [PMOI/MEK], these terrorists and sworn enemies of the Iranian nation. The Hypocrites [PMOI/MEK] gathering in Paris had been advertised for some time in advance, and the officials of this group, which has been driven from Iraq, had tried for months to use any possible tactic to encourage more people to take part in this meeting. However the Hypocrites’ meeting took place with the same figures as before. American and European officials who support this grouplet [PMOI/MEK] took part in this gathering right at the time of the nuclear negotiations.

David Jones MP (UK) (translation): It’s a huge privilege to be among you in this magnificent gathering in Paris today. I commend you for your courage and your perseverance in your struggle to achieve human rights and democracy. Millions of Iranian people are looking to you as their source of strength.

The presence of Western figures, who claim to speak for human rights, in the meetings of the Hypocrites [PMOI/MEK] is nothing new. In the past, each time such events were held, Westerners were always present; events which mostly had one goal: Changing the political regime in Iran.

The presence of some Western figures and their insistence on cooperation with the enemies of the Iranian nation reiterates this historical reality that the West will not turn the page of animosity towards Islamic Iran so soon. However, the passionate and meaningful presence of the people in the commemoration for the martyrs of the Sacred Defense [Iran-Iraq War] clearly showed that the hand of the plotters has now been exposed for the Iranian people, and when required, this insightful nation will be present at the scene to neutralize the plots.”

U.S. and European security and military officials were among the renowned guests who at that start of this week took part in the Paris meeting. Even the chairman of the Armed Services Committee of the U.S. Senate sent a video message for the start of this meeting. Under such circumstances the delisting of this grouplet [PMOI/MEK] from the U.S. and European terrorist lists is a strange phenomenon that clearly shows that Western countries are backing terrorism. While the U.S. claims that it is interested in a comprehensive and lasting agreement over the nuclear dossier, the constant ties between senior security and military officials of this country with the terrorists shows that the Americans are behind the curtains pursuing the same old defeated scenario of regime change.”

Islamic Republic of Iran News Network (IRINN): “The Hypocrite grouplet’s [PMOI/MEK] gathering in France took place with the presence of certain Western officials in this meeting under the slogan of changing the Islamic Republic. A number of current and former U.S. and European officials and the head of this ex-communicated group as well as opponents of Syria attended. In a pre-recorded video message to this meeting, John McCain, a Republican Senator from the U.S., claimed that with the lack of US global leadership, Iran continues to fund terror and incite chaos in the region. Dana Rohrabacher, a Republican U.S. Congressman from California, claimed that Iran has reached it final days.”

The gathering of the Hypocrites [PMOI/MEK] on [Saturday] in Paris had two senior U.S. guests who repeated the slogans of this terrorist grouplet [PMOI/MEK].

According to the Washington Times, Senator John McCain, chairman of the Armed Services Committee of the Senate who is well-known for his opposition to a nuclear deal, sent a video message to the gathering’s audience in which he described Iran as the true epicenter of Islamic extremism in the region.”

“A vast budget for holding gatherings and inviting students and small political groups is only part of the actions of the Hypocrites [PMOI/MEK] to cleanse its name from violence and terrorism.

One of the items on the agenda of the Resistance’s grand gathering was the broadcasting of various video clips.
Among the video clips that were broadcasted was “The story of the red flower”. This was a video clip about a young girl who had lost her father who was a PMOI member and whose only memories of her father were that which her mother had told her.

It is said that a number of Canadian and Australian senators took part in the Resistance’s grand gathering in Paris. They defended the positions of the terrorist Hypocrites (PMOI) against the Islamic Republic of Iran and promised to support the Ashrafis (PMOI members).” 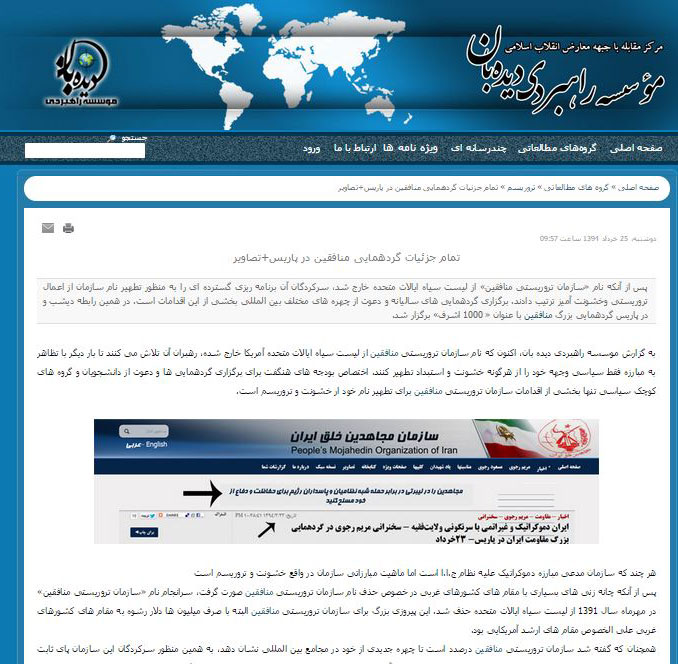 “McCain’s speech for the Hypocrites’ (PMOI) meeting
In his speech, McCain claimed that the Iranian government is the true epicenter of Islamic extremism in the world.
McCain claimed that in the vacuum of the Obama administration’s global leadership, Iran continues to fund terror and incite chaos in its campaign for domination.”

“Paris showed its animosity toward the Iranian nation
The terrorist leaders of the so-called Syrian National Coalition took part in the meeting of the members of the Hypocrites [PMOI/MEK] in Paris, exposing the depth of cooperation between these two terrorist groups and exposing more than ever for public opinion the falsity of the West’s claims of supporting democracy and combating terrorism.

Haitham al-Maleh, the so-called head of the Legal Commission of the Syrian National Coalition, while among leaders of the Hypocrites [PMOI/MEK], shed crocodile tears for the Islamic and revolutionary people of Iran and repeated the baseless claims that are parroted by Saudi and Western media and by officials of some regressive Arab regimes, including the Saudis, that Iran is a threat for regional security and supports terrorism.

Another issue of regret is the widespread coverage for this anti-Iranian meeting and the use of misleading terms by Saudi and other anti-Iranian media outlets.