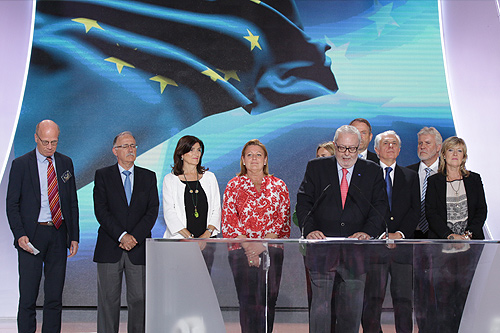 Text of speech by Pedro Agramunt, President of the EPP group in the Parliamentary Assembly of the Council of Europe, in a major gathering of the Iranian Resistance held in Paris on 13 June 2015.

I’m very pleased to see you all once again and I hope that this year we will witness your final victory.

As a President of the EPP group in the Parliamentary Assembly of the Council of Europe, I have invited Madam Maryam Rajavi twice to address our political group because I believe in their wonderful leader.

Her incredible achievements have truly democratic nature besides the condition. Madam Rajavi’s presence has always attracted a lot of support for your movement and in our general session when she was our guest 200 members of Parliament from almost 30 different countries and all political spectrum signed a statement which supports her ten point plan for the future of Iran.

But let me now also tell you about an eye-catching moment in our general session when we commemorated the 17th anniversary of the liberation of Auswitz and pay tribute to the victims of holocaust while we had Madam Rajavi beside us.
She participated in that ceremony alongside high ranking officials of the Council of Europe.

As a leader who has experienced a great loss under a cruel religious dictatorship she had the strongest feeling in that ceremony. For us as Europeans Auswitz is a symbol of humanity that is both barbarous and organized. It represents an extermination machine for all categories of the population and aims of destroying the dignity, hopes and history of individuals.

This is exactly what the Mullahs are doing today in Iran so we are duty-bound to prevent holocaust from recurring and prevent Camp Liberty from becoming another Auswitz.

I hope very much that we will be able to promote our efforts in the Parliamentary Assembly of the Council of Europe into serious decision which oblige the council of Europe member states to adopt the right policy towards Iran and give full support to your movement. Thank you very much. Viva Maryam Rajavi, viva free Iran.