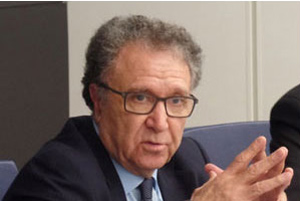 The Iranian Resistance has rendered one of the biggest services to humanity by revealing to the world that the regime in Tehran was constructing a nuclear bomb, the representative of the National Council of Resistance of Iran (NCRI) in Nordic countries has said.

“The regime is basically sustained by two pillars – exporting extremism in the region and making of an atomic bomb. These are its two raisons d’être. An atomic bomb is a guarantee for the existence of the regime,” Perviz S. Khazai, a former Iranian ambassador who now represents the NCRI, said on Saturday in an interview with EUBULLETIN.

“The [regime’s] only tool to survive is to make the bomb. The Iranian regime has been hiding it from the world for 18 years, secretly taking help from Soviet scientists. In 2002 when we presented evidence that the regime had been trying to construct an atomic bomb, the whole world was awaken. We are very happy we said it to the world,” he said.

“You know, Hitler was also trying to build an atomic bomb, in Norway, and had he managed to do it before Oppenheimer, our world would be different today. But the Iranian regime is still proceeding to make a bomb underground. They are cheating the West as the West shows its indecisiveness. The Obama administration is very lenient and Iran sees it as a weakness, they have the courage to proceed, they are playing with the West.”

Khazai said that a possible upcoming agreement between the world powers and the Iranian regime to curb the regime’s nuclear program in return for the lifting of international sanctions would seek to monitor the regime’s compliance, “but the regime has hidden sites inside military zones. Pasdaran (Revolutionary Guards), something like the SS army, is protecting atomic plants inside military installations. It is not done by a regular army but by this specialized SS-like branch of Iran’s Armed Forces. The regime can hide these plants and it will never agree that these places are checked by international observers as well.”

“We share agony of all the people who are against the regime. The regime has demolished Iran and cannot be trusted. It is cheating Iranians themselves and lying about the bomb. They think that the North Korea-like scenario is the only continuation of their rule. In Iran, 80 percent of the people are poor, they do not get salaries. The regime needs an external crisis. Remember what Orwell wrote in his 1984 – the big brother needs a foreign enemy. They need an atomic bomb.”

“In Hiroshima, atomic bombs were heavy but today you can make an atomic bomb that is a size of a Coca Cola bottle. You can carry it in a briefcase. They have no hesitation, they could come to the city of London, New York and … This is not a pessimist scenario just some naïve people think this could not happen,” he added.

The NCRI’s exposure of the Iranian regime’s uranium enrichment site at Natanz and heavy-water facility at Arak in August 2002 led to an investigation by the UN nuclear watchdog which found that Tehran had been secretly running a nuclear program for years. Over the past decade, the NCRI has made dozens of revelations about the Iranian regime’s illicit nuclear activities.