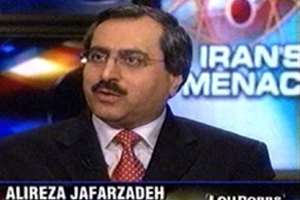 Without a “firm stance” by the international community against the Iranian regime’s calculated tactics in the nuclear negotiations, Tehran will continue to “deceive, distract, and distort” on its way to build an atomic bomb, Alireza Jafarzadeh, deputy director of the US representative office of the National Council of Resistance of Iran (NCRI), has said.

“As the intense negotiations in Vienna inch closer to the new July 7th deadline, Tehran’s elusive tactics were put on display with Tehran’s Foreign Minister Javad Zarif releasing a Youtube video in which he claimed the regime had made enough compromises. To his credit, however, Secretary of State John Kerry was not impressed, insisting that the Iranian regime had to make ‘hard choices’ in the next couple of days, and ‘quickly,’ otherwise, ‘we’ll be prepared to walk away,'” Jafarzadeh wrote in an opinion piece in FoxNews.com on Monday.

He pointed out that a recent report released by the opposition NCRI provides insights into how to read Tehran’s ongoing negotiating tactics, including the latest theatrics by Zarif. The 28-page analysis, relying on public and classified sources within Iran, reviews the Iranian regime’s behavior during two periods of talks (2003-2004 and 2013-2015) and discerns the principles of Tehran’s approach and tactics during negotiations to reach its objectives.

The Iranian regime has deliberately used the illusion of “trust building” to neutralize necessary and indispensable “transparency” measures that are critical components of any successful nuclear agreement, according to the report.

The NCRI’s analysis notes that the regime’s Supreme Leader Ali Khamenei has personally outlined the framework for the regime’s negotiating teams, consistently reiterating three red lines over the past two years: No access to military sites, no access to nuclear scientists, and no end to nuclear research and development.

To evade intrusive inspections, the Iranian regime has dangled an alleged 2003 “fatwa” (religious decree) associated with Khamenei, which purports to reject the pursuit of nuclear weapons. The regime’s president Hassan Rouhani cited the fatwa as proof for the peaceful nature of the mullahs’ nuclear program during his 2013 UN General Assembly speech.

“No document against nuclear arms exists in Khamenei’s handwriting and carrying his stamp–a standard practice for fatwas. And even if it had ever been issued, the edict would have little value since Khamenei is not considered a jurisprudent in Iranian and Shiite religious centers, not to mention that he can overturn his own alleged stance if deemed expedient for the regime’s survival. Within the regime, a fatwa is only binding for the followers of the religious scholar who issues it, not binding on the government,” Jafarzadeh wrote.

The NCRI study has identified seven principles governing Tehran’s negotiations: Final decisions are to be made by Khamenei; The military dimensions of the program should remain unaddressed; Only disclosed sites should be dealt with; The IAEA should remain preoccupied with unresolved matters; The entire nuclear infrastructure should remain intact; promises should be made only verbally; and the talks should be kept alive.

According to the study, the regime has used eight tactics to achieve these objectives, all of which have been in play in Vienna. They include prolonging the negotiations, distracting attention from the possible military dimensions of the program, insisting on no access to sensitive sites, hiding everything until exposed, deferring response to specific questions to future reports, building optimism to extract more concessions, removing the issue of research and development from all discussions, and using fringe talks to create discord among interlocutors.

“Against this backdrop, P5+1 negotiators would be wise to insist on their own principles: anytime, anyplace snap inspections of all sites, unhindered access to all individuals and documents associated with the nuclear program, satisfactory resolution of IAEA’s outstanding questions, no research and development on advanced centrifuges, full disclosure of foreign assistance including from North Korea, shipping all enriched uranium abroad (except 300 kg), no sanctions relief until Tehran’s full compliance, and automatic snap-back sanctions if Iran cheats,” Jafarzadeh added.

“Without a firm stance against the regime’s calculated tactics, Tehran will continue to deceive, distract, and distort, on its way to build the Bomb.”