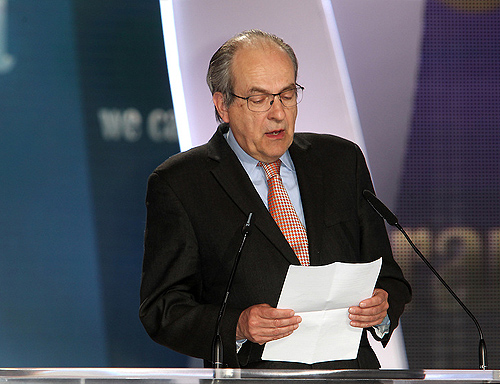 NCRI – The former head of the United Nations in Iraq Ad Melkert has said that members of the main Iranian opposition group People’s Mojahedin (PMOI/MEK) in Camp Liberty, Iraq, are refugees and must be recognized as such by the international community.

The UN Refugee Agency must engage the government of Iraq on the “status of Camp Liberty as a refugee camp under protection of international law”, Mr. Melkert, former head of the United Nations Assistance Mission for Iraq (UNAMI), told a major annual Iran Freedom rally in Paris on 13 June.

The following is the full text of his remarks.

Dear friends,
I’m honored to be here today with all of you to reiterate my commitment to continue the pursuit of justice, to continue to knock on closed doors as long as it takes to get them open, to continue to encourage the international community to stop looking the other way, in order to bring the residents of Camp Liberty to freedom and a new life.

I’m concerned that despite all of our efforts over the past periods, injustice continues to prevail, doors continue to be locked, and the international community has not been able, has not endeavored, and simply has not dared to force a breakthrough in the five years of siege that is the real name of the game going on around [Camp] Liberty.

It is true that unfortunately the situation in large parts of the Middle East has deteriorated, opening up to anarchy, cruelty, persecution, sectarian divide, and seemingly endless and limitless suffering of people that just want to live their lives in peace with their kin and neighbors instead of being massacred at the hands of forces and powers with their own agendas regardless of the human price to be paid. It is however not true that, therefore, the plight of the Liberty residents should be considered of lesser importance amidst the turmoil that’s raging on.

On the country, it is more than ever clear that the stalemate at Liberty is at the same time a symptom and a symbol of extreme polarization of a culture of zero-sum thinking within which there’s no place for reconciliation or conflict resolution. Bringing a close to the siege of Liberty is more than ever urgently needed as the dire facts on the ground in Iraq show that no one can feel safe generally, least of all those that were unwanted by many already. So why is it that the international community is looking on whilst an accident is waiting to happen, knowing the fate of tens of victims in Camp Ashraf in the cause of recent years?

Recently I had the privilege to work with colleagues and friends on proposals to the UN and governments that would reassure the Camp Liberty residents that the government of Iraq and the international community will provide them with the protection that they deserve in anticipation of their resettlement to safe places and a secure future.

Let me reiterate the immediate steps needed, and possible, to break the impasse:

1) To have the US and EU member states and other interested countries accept quota for granting asylum to and pledge funds for the resettlement of Camp Liberty residents;

2) To have the UNHCR engage the government of Iraq on the status of Camp Liberty as a refugee camp under protection of international law;

4) To request UNAMI to appoint impartially liaison officers to reside in the camp and ensure independent reporting on the day-to-day living conditions;

5) To insist that the government of Iraq should ensure access to medical services;

6) To urge the government of Iraq to ensure that the camp be connected without delay to the city’s electricity grid.

It should not be too difficult to start working on these steps, as long as the political will would be there to consider the residents as the refugees that they are. This would also make it easier for UN member states to respond to the call by the UN secretary-general to enable resettlement or provide resources for resettlement. The crucial link between wish and reality should be established through UNHCR’s task and responsibility to ensure that the residents get documents that make them persons with a status instead of keeping them in the legal limbo as is the case in their current situation. Not ignoring their existence, but bringing them back into the world of normal rights and recognition; not staying silent and stand-by; breaking the silence; that is what we need now. Putting the spotlight on injustice and turning that around; that is what we need now. Pushing the international community towards unambiguous action; that is what we ask here and now. Thank you.