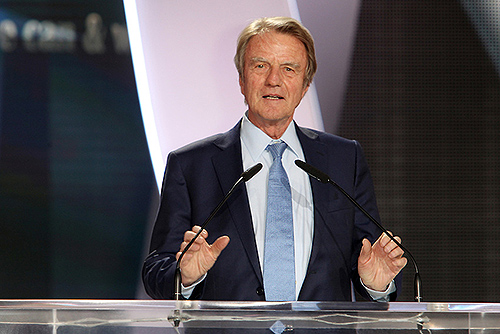 NCRI – Former French Foreign Minister Bernard Kouchner has said that Mrs. Maryam Rajavi, President-elect of the Iranian Resistance, ought to be commended in her role as a woman leading the fight to liberate Iran from religious tyranny.

Mr. Kouchner, co-founder of Doctors Without Borders (MSF), was speaking at the huge annual Iran Freedom rally in Paris on June 13 organized by the Iranian opposition.

“Mrs. Rajavi presented us with a vision of the region and the wider world … Her precision is commendable,” said Mr. Kouchner, while thanking Mrs. Rajavi for her “brave” speech at the gathering.

“We heard the voice of hope and we heard that nothing can prevent you in your struggle for democracy against religious fascism.”

“We in France must support this struggle. You can count on me to stand with you.”

Mr. Kouchner agreed with Mrs. Rajavi that ISIS and the Iranian mullah regime had the same fundamentalist nature and that peace in the region could only come about with the establishment of democracy in Iran.