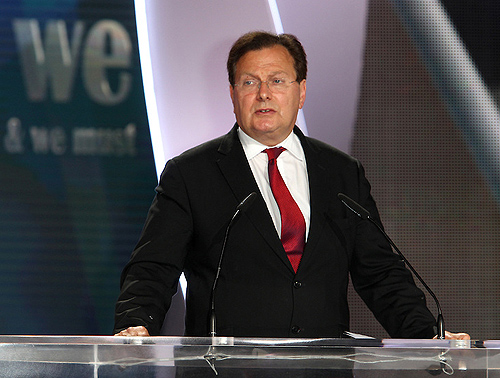 NCRI – Islamic fundamentalism is a growing global problem, and the National Council of Resistance of Iran (NCRI( under the leadership of Mrs. Maryam Rajavi is challenging it in the Muslim world, Peter Goldsmith, former Attorney General for England and Wales and former Chairman of the Bar of England & Wales, has said. The following is the text of his speech at the annual Iran Freedom rally in Paris (Villepinte) on June 13, 2015:

Friends, you’re here today to demonstrate your commitment to human rights, to democracy, to the rule of law, and to a free Iran. I’m proud to be one of these here with you, not only because your cause is right for Iran and the people of Iran, not only because it is wonderful to be celebrating and looking forward to liberty in the weekend when Magna Carta, the great charter of British liberty is being rededicated by Her Majesty the Queen, on Monday, but also because what you are calling for is right for the rest of the world.

To tackle extremism and Islamic fundamentalism is something that we have to deal with as well. This is not just your struggle; it’s our fight for survival too. That is not disappearing, it’s growing. It’s not a problem which is confined to a particular region. The danger of this phenomenon is seen and felt by everyone as we see in our newspapers and on our television screens every day. And whilst this is not the occasion for a deep analysis of what the problem is, one thing is clear; we have to identify the roots of the problem. We’ve tried in my country—and I’ve been a part of this—to tackle the problem of fundamentalism, of violent extremism, and terrorism, with different tools with new laws against extremism, with new laws against terrorism, with speeches, with teaching, and yes of course with military force too. Each of those has a place. But each has its own problems. And unless we can get to the root of the problem we will not succeed.

And part of the root of that problem, perhaps the biggest part of that, is what happened in 1979 when religious dogma and political absolute power came together in Tehran. And therefore to deal with the regime in Tehran, which is a big part, perhaps the biggest part of the promotion of extremism and terrorism around the world, is something that we have to support as well. Dealing with that requires a cultural change as well as all the things I’ve mentioned. And here with the National Council of Resistance, with your hugely impressive president, we see how the Muslim world, which has to take this challenge on, is doing so.

So today when I attended this extraordinary meeting I’m inspired and utterly impressed by your commitment. You are sending a clear message to the world about your need for human rights and democracy and the rule of law. And the world needs to hear it not just for you, but the world needs to hear it because it needs the same thing that you need. So I wish you as well as I can in the endeavor that you have, and I’m proud and pleased and privileged to be a part of this extraordinary demonstration of your commitment today.