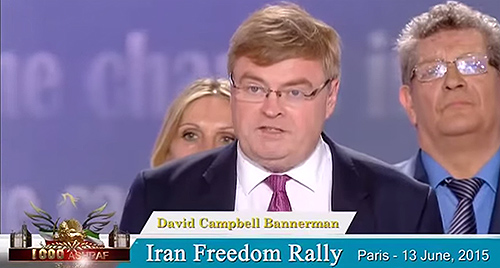 NCRI – European lawmaker from the UK, David Campbell Bannerman, has warned that concessions by world powers to the Iranian regime in international negotiations over its nuclear program, without consideration of its gross human rights violations, ‘smacks of appeasement.’

David Campbell Bannerman, President of the European Parliament’s Delegation for Relations with Iraq, made the remarks at a major Iran Freedom rally in Paris on June 13.

The following is the full text of his remarks.

I’ve been following the talks between the West and Iran with skepticism. The announced framework for an agreement on Iran’s nuclear program poses a great risk not only to the Middle East but to the international community as a whole.

Iran’s centrifuges have multiplied from around a hundred at the start of these negotiations to 20,000 today. Under this framework for ten years Iran will just be one year away from having a nuclear weapon.

Some senior Iranian officials have even described negotiations as a form of Jihad by other means. The regime is laughing at the West.

Barely 24 hours from the signing of this agreement Iranian warships were shelling our allies in Yemen. This nuclear agreement smacks of appeasement with no regard to the Iranian regime’s gross human rights violations that include mass executions of political opponents, contempt for women and brutal repression.

President Rouhani is painted as a modernizer, but more than 1800 people have been executed under his only two-year rule; 250 people alone in April and May this year. Per head, this Iranian regime has the worst level of executions in the world.

Now while Iran would regard negotiations as a concession, the P5+1 and the EU have attempted to break every stalemate with yet more giveaways. This collective rationalization and the illusion of unanimity highlight the danger of group-think. A misguided EU policy in concert with the US administration infects the wider international community’s judgment. This is folly. Further, Iran has intensified its attempt to entrench its influence in neighboring countries as a sponsor of terrorism. It backs proxy forces, Shia militia groups in Iraq, in Lebanon, Gaza and the Taliban in Afghanistan. So whilst the mullahs in Iran continue to proclaim an extreme revolutionary anti-Western international order and to sponsor terror worldwide, we should keep sanctions in place, because they work.

In closing, I salute the courage of Madam Rajavi and the PMOI [MEK] in their tireless efforts to hold this appalling regime to account and to create a nuclear-free, secular and democratic Iran that fully respects human rights and the rule of law. Thank you.