Nuclear-armed Iran is equivalent to Hitler with nuclear weapons 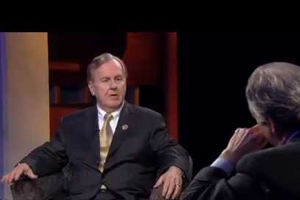 US Rep. Robert Pittenger, who attended the annual Iran Freedom rally in Paris over the weekend, has told a US radio station that the threat of Iran’s regime having nuclear arms is equivalent to “Hitler with nuclear weapons.”

Robert Pittenger, a North Carolina Republican Congressman, spoke with local radio station WBT Radio on Monday about his trip on Saturday to the huge rally in Paris.

“Iran has been under the oppression of the ayatollahs and the mullahs now for 30 years and there’s a tremendous movement inside Iran, encouraged by people who came from all over the world to this meeting in Paris and the intent was to declare to the world and to Iran a full commitment to find freedom and find liberty to that great country,” Mr. Pittenger told station.

“I really told them that the American people, the American congress stood in solidarity with them on issues related to human rights and the lack of human rights in their country; the oppression of the people. We stood with them against the nuclear agreement that is being forged right now with Iran, as well as Iran being a sponsor of terrorism throughout the Middle East and throughout the world.”

“What we see today is Hitler with nuclear weapons potentially, and that is the greatest threat this world has ever seen,” he added.

In a separate live radio interview on Tuesday with SiriusXM’s POTUS Channel, Mr. Pittenger said the Iranian regime is the “greatest state sponsor of terrorism.”

The message of the Iran Freedom rally in Paris which was attended by people from all over the world was “regime change” in Iran, he told the station.

The Iran Freedom rally in Paris was attended by some 600 international lawmakers and dignitaries in support of opposition leader Maryam Rajavi’s 10-point plan for a future free Iran.