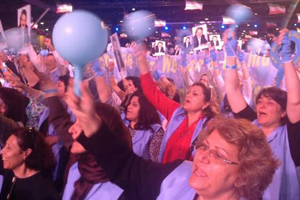 NCRI – An Iranian political prisoner has praised the organizers and participants of the giant Iran Freedom rally in Paris on June 13 organized by the opposition in support of democratic change in Iran.

Political prisoner Arzhang Davoodi said in a statement from Rajai-shahr Prison: “All populist and patriotic activists have concluded that the time for superficial changes in Iran has come to an end and freedom from tyranny requires hard efforts from which a truly democratic revolution be achieved.”

“It is an urgent necessity that all of us set aside all our cultural, political and social differences and stand on the side of the people who have risen across the country to bring down the 500-man clan of Ali Khamenei from power and have them face justice in the courts.”

Mr. Davoodi thanked all those who organized the Paris rally to ‘bring the cries of the Iranian people for justice to the world.”

“From the dungeons of the Velayat-e faqih regime I thank all those who attended this protest gathering and I shake the hand of every participant.”

Arzhang Davoodi, 62, from the city of Abadan, was originally arrested in November 2003 and has spent nearly 12 years in prison for his opposition to the regime. He received a death sentence in July 2014.

Other political prisoners across Iran sent similar messages expressing their solidarity with the June 13 gathering in Villepinte (north of Paris).

The huge rally also gained international support and was attended by over 600 dignitaries and parliamentarians from some 70 countries across the globe.
The participants expressed their support for Iranian opposition leader Mrs. Maryam Rajavi’s 10-point plan for a future free Iran.