Video – Giulio Maria Terzi: NCRI is only solution for the future of Iran 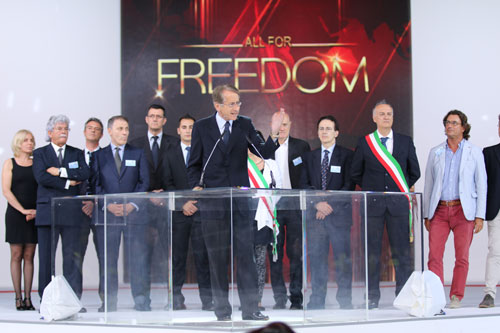 Giulio Maria Terzi also described Mrs Rajavi’s vision as a ‘struggle for humanity and dignity against state terrorism and contempt of its own citizens’ and accused the Iranian regime of the ‘systematic violation of fundamental human rights’.

Mr Terzi was speaking as the large delegation of Italians including elected officials and members of parliament accomponied him.

He urged the US and the United Nations to work to protect and relocate the 3,000 Iranian dissidents in Camp Liberty who are being terrorized by the Iraqi government at the behest of the Iranian regime, and he insisted that negotiations over Iran’s nuclear program should not deflect from the priority of restoring freedom and democracy in the regime.

He said at the gathering on June 27: “It has been wisely proposed that sanctions should only be lifted when international obligations concerning human rights are fully implemented. Abuses of human rights cannot be condoned in any possible way. It is extremely alarming that the first year of President Rouhani leaves no hope for moderation.

“The promises made by the new leadership have dramatically failed. Over 700 inmates have been executed since Rouhani’s election, and the shocking death of Gholamreza Khosravi ,one of your martyrs, one of your best people, hanged by the theocratic regime after 12 years of tortures is a horrible crime. And as such every politically motivated execution should be considered by governments like the European ones which place human rights at the center of their foreign relations.

“Severe restrictions, attacks on religious groups, politically motivated incriminations for crimes against God are some of the main tools the theocratic regime more and more frequently uses to deter opponents, to terrorize citizens, to consolidate its power. Faith in God can never justify violence or crimes committed under the banner of religion.”

He also attacked the ‘obvious complicity’ of Iraq in the abuse and murder of residents in Camp Ashraf and Camp Liberty, who are he protected persons by the UN and the US.

He added: “Iran has requested the extradition of all residents in Camp Liberty, and General Shamari is misleading any independent inquiry. All this must stop, but from the news that you are getting from the field perhaps it’s stopping already and justice is closer. And people who have been responsible can be brought to justice in the future, I hope very soon.

“Developments in Iraq are dramatically affecting the entire region. They make the need to protect and rescue all the residents in Camp Liberty more evident and urgent than ever before. These residents must be given refugee status in our countries and in European countries.”

“Maliki is not really committed to an inclusive democratic Iraq respectful of human rights, of religious and political minorities. He has already stated the contrary. He only wants to please and serve Iran,” Mr. Terzi said.

“The enormous energy of this gathering shows that the National Council of Resistance of Iran is ready to meet the steep challenges faced in Iraq and Iran. Only the freedom you are advocating will change Iran and the whole region.”

Patricia Solis Doyle: ‘Fight for women’s equality is indistinguishable from the fight for global peace’