Patricia Solis Doyle: ‘Fight for women’s equality is indistinguishable from the fight for global peace’ 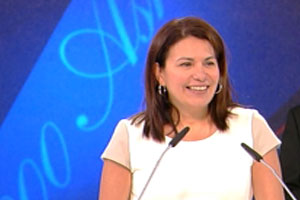 Patricia Solis Doyle, senior adviser to the 2008 US presidential campaign, compared Iranian Resistance leader Maryam Rajavi devotion to the cause of equality to that of Hillary Clinton’s campaign to stop abuses against women.

Mrs Doyle said: “Hillary planned to call for the end of female circumcision. She planned to condemn mass rape, child sex trade, forced sterilizations and coerced abortions. She wanted to abolish the dousing of women with gasoline and setting them on fire. She supported a global effort to create laws allowing women to own their own businesses. It’s hard to argue with any of that, even 20 years ago.

“But President Clinton’s National Security Council tried to block the trip anyway, listing a dozen ways Hillary might disrupt relationships with the Chinese. Meanwhile critics in Congress derided her agenda as radical. Hillary gave the NSC an ultimatum: help her go as First Lady or watch her go as a US citizen.”

The Chinese government tried to block her and women speakers from attending, but thousands of women attended anyway.

“Like Hillary’s argument in Beijing, Madame Rajavi’s argument is simple enough—the fight for women’s equality is indistinguishable from the fight for global peace. In this way Maryam and Hillary are very similar, they both have devoted their careers to the same cause, fighting for women to have access to information, fighting for gender equality and political and social economic arenas, and fighting for the universal declaration of human rights.”