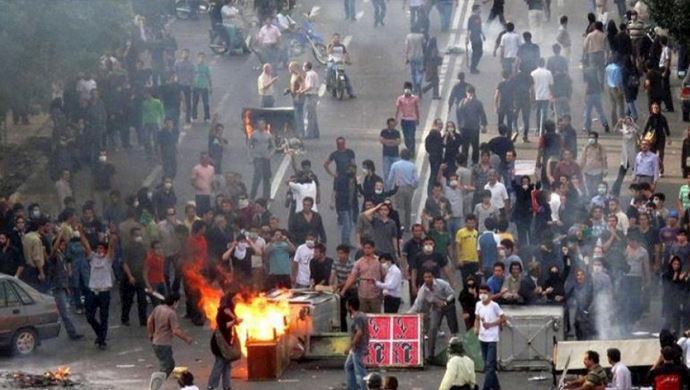 Iranian officials and state media have acknowledged the leading role of the main Iranian opposition group People’s Mojahedin Organization of Iran (PMOI), also known as the Mujahedin-e-Khalq (MEK), in the Iran protests that began on November 15, 2019.

A cursory look at the statements and positions declared by the regime’s leaders and state-run media clearly shows that Resistance units of the MEK were at the core of the uprising. These Resistance units were formed several years ago and have spread throughout the country since. They have a wealth of experience gained on the ground and through thousands of acts of protest, sit-ins, and strikes.

The regime’s Supreme Leader, Ali Khamenei, said in a televised speech on November 17: “In the course of such incidents, usually thugs, spiteful individuals, and unsavory people enter the scene. … You see that over the past two days, the two nights and one day, in which these incidents happened, all of the world’s centers of evil have encouraged these actions against us. From the evil and wicked family of the Pahlavi dynasty to the wicked and criminal collective of the MEK, they are constantly encouraging and inviting people on social networks and elsewhere to conduct these evil acts.”

According to the IRGC-affiliated Fars news, Hossein Ashtari, the Commander of State Security Forces (SSF), said: “Our investigations show that behind the scenes, anti-revolutionary organizations and the MEK led these movements. The country’s security and law enforcement entities have identified these individuals, and God willing, they will be punished for their actions at the right time.” (Fars News Agency, November 17)

The speaker of the regime’s Majlis (parliament), Ali Larijani, said: “After hearing the profound and expedient words of Your Excellency (Khamenei), members of the Majlis consider it imperative to follow the path directed by Your Excellency, and we must coordinate more in order to deprive America, the MEK, and anti-revolutionary stooges the opportunity to create chaos in the country.” (Farhang Radio, November 18)

A member of the regime’s Assembly of Experts and former Intelligence Minister, Mohammad Mohammadi Reyshahri, said: “The riots were not carried out by the people. The torching of the people’s belongings and the destruction that happened were done by the MEK and anti-revolutionaries. People do not set fire to their own assets. The MEK was planning for riots for several months. They were quickly identified and their ranks were separated from those of the people.” (Defa Press, November 18)

The spokesperson for the Majlis Presiding Board, Assadollah Abbasi, said: “Ali Shamkhani, secretary of the Supreme National Security Council, said at a closed-door meeting of the Majlis that a number of individuals who provoked people in the streets had been identified. It has become clear that they are in contact with the MEK. They were some of the thugs of the region who got paid to create chaos.” (ILNA, November 17)

A Majlis deputy from Malayer said: “The Islamic Republic has been able to establish sustained security in Iraq and Syria. It will never succumb to the MEK‘s actions. The people of Iran, who remember enormous sacrifices, will never allow the blood of the martyrs to be trampled upon and will not support their actions. Therefore, they will not align themselves with the MEK and thugs.” (Fars News Agency, November 17)

The head of the IRGC’s paramilitary Bassij force, Gholamreza Soleimani, said: “The MEK has cells (units) in our country. And in other countries, too, agents and the MEK who are tied to America damage the public’s interests.” (Tabnak website, November 18)

The state-run daily Jomhouri Eslami reported on November 18 that “the commander of the IRGC Fajr in Fars province says that the leaders of the riots had ties to the MEK.”

Jomhouri Eslami daily wrote in its editorial on November 20: “The scale of the destruction was so vast and the actions were so professionally carried out that it directed attention to the fact that a well-trained and well-equipped network was at work, which had financial and strong intelligence support. After the passing of two or three days, it is now clear that this assessment was correct and the destruction and evil acts were completely organized. The rebels, in groups of several people, went to predetermined locations and were guided by a defined command center, and resorted to destruction, setting fires, provoking the people and chanting slogans that were unrelated to the rationing issue or increase in the price of fuel. They use special signs and symbols to identify each other more easily during their operations.”

The IRGC’s spokesperson, Ramezan Sharif, was quoted by the Mehr News Agency as saying: “Rioters belonged to the MEK. The MEK has a darker track record than the monarchists. They have a violent streak. In a recent poll, the MEK has been identified as the most hated group.” Mehr news agency adds: “He pointed to the fact that the rioters were trained, equipped and organized by the MEK in order to plot against the country and said: ‘These people carry out tangible activities both in the realm of the soft war and cultural warfare, as well as in the area of inciting insecurity.”‘ (November 20)

Khamenei’s representative in Gilan province, Rasoul Falahati, said: “We know that you (protestors) are the children of the executed MEK members. You are the children of the MEK in exile… We know who you are… You should no longer walk the same path as your ill-fated predecessors. You should come back to the arms of the people. Repent! The Judiciary must firmly hand down the ultimate punishment for the main elements of the recent riots. They are responsible for disturbing the peace.” (Baran TV, November 20)

The state-run Afkar News said on November 20: “The detainees are in some shape or form tied to the MEK and foreign elements. They received the necessary training over the last two years in order to carry out these actions.”

The IRGC-affiliated Javan newspaper wrote in an editorial by its editor Abdollah Ganji: “Attacks conducted against sensitive centers, including military and law enforcement centers, marked the unique feature of this episode. Attacks were carried out against dozens of police stations, IRGC and Bassij centers, using cold weapons and firearms. Several Basijis were surrounded and killed. Therefore, the core of the attacks shows the extent of violence and coordination of the riot… Special roles were defined for women. They played a fundamental role both in attacking our Bassiji sisters and also evoking emotions among the youth. Although they did not have any casualties, the manner in which women were employed is similar to the maneuvers of women in the MEK.” (November 20)

Ali Shamkhani, Secretary for the Supreme National Security Council: “I believe 34 MEK members have been arrested so far. A vast network of individuals, operating not under the MEK’s name, but pursuing their line and modus operandi were also identified.” (Defa’ Press, November 24, 2019)

Alireza Adyani, head of the Ideological-political organization of the police force: “The incidents of recent days in the country were more complicated than those which occurred in 1999, 2009 and 2018. In one day alone, unrest erupted in 165 cities of 25 provinces. The recent sedition caused insecurity in 900 locations…” (Rasa News Agency, November 21, 2019)

Salar Abnoush, Commander of Operations of the Bassij Organization: “There was an all-out world war against the state and the revolution. Strange and incredible coordination in the current sedition was formed and they were only waiting for a spark to destroy the country. Additional information will be provided after extracting confessions. As a field person, I believe God was our savior…” (ISNA News Agency, November 21, 2019)

Gholamhossein Esmaili, The Judiciary Spokesman: “According to IRGC’s report, around 100 leaders and essential elements of these riots have been arrested in different parts of the country. Other people, more than the above, have been identified by the MOIS and a number of them have been arrested, or are on the verge of being arrested.” (Javan weekly, November 24, 2019)

Previous articleIran: Pictures and Messages of Resistance’s Leadership in Tehran, Other Cities
Next articleDay 27 of the Iran Protests for Regime Change