Coronavirus Fatalities in 340 Cities Surge Past 61,800 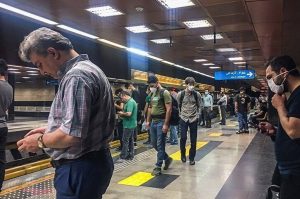 Specialist physicians are saying that Coronavirus is spreading at a horrific rate in Tehran. Some hospitals, such as Khomeini Hospital, are again full of patients. This is while most patients are being treated on the spot and are quarantined in their homes. They only hospitalize the critically ill, namely 20 percent of them. Many of the critical patients needing special care die because the ICU wards are full to capacity. Physicians are saying that if urgent action is not taken in Tehran, the number of the infected who go to hospitals will exceed 100,000. Deaths will quickly rise, especially in the southern regions of Tehran.

In a video conference with Judiciary officials today, Khamenei reluctantly admitted the resurgence of Coronavirus and brazenly blamed it on “weakness among some people and officials” and criticized “those who believed the virus had ended.” Earlier, on March 3, he had said, “This calamity is not so big. There have been bigger ones before… The problem will stay in the country, but not for a long period and will go away.”

The Health Ministry’s spokesperson put the number of death in the past 24 hours at 125 and the number of new infections at 2,456. She said the number of those in critical condition and under special care was 2,928, adding, “Khuzestan, Kermanshah, Kurdistan, Homorzgan, West Azarbaijan, and Khorasan Razavi are red and East Azerbaijan, Sistan and Baluchestan, Bushehr, Lorestan and Golestan have been issued warnings.”

In announcing the piece-meal figures, Deputy Health Minister Iraj Harirchi, told IRNA today, “One person dies every minute, and one person is infected every 33 seconds nationwide… Many cities are in the state of red.”

In Zanjan, the president of the Medical Sciences University told IRNA today, “343 tested positive yesterday, whereas the figure was 200 the day before. Before 20 percent tested positive. This has reached 40 percent now. In the next few days, a substantial number of beds are needed. The University has been put on full alert, and all vacations have been canceled. The number of infected patients has risen nine-fold.”

In Golestan, the president of the Medical Sciences University told Asr-e Iran today, “About 20 percent of those infected are in critical condition and hospitalized in ICH. Have of the Province in terms of its landmass and population are in the state of red.”

In Hormozgan, the president of the Medical Sciences University was quoted by ISNA as saying today that 280 medical personnel have been infected. He added, “This week and the next are the dangerous weeks of COVID-19 in Hormozgan. His deputy told the Tasnim news agency today, “More than 10,000 people have been infected Province-wide. More than 510 have been hospitalized, and hospitals do not have room to accept more patients in the next few days.”

In Kurdistan, the president of the Medical Sciences University told ISNA today, “To pre-empt the decline of Oxygen reserves, it is not possible to add hospital beds or allocated the entire Towhid hospital to Coronavirus patients. Only 200 beds are usable for them because if we hospitalized more, the three Oxygen-producing machines in the hospital would be insufficient.”

In Qazvin, the acting president of the Medical Sciences University told ILNA on June 26, “Since June 6, we have seen the upward trend of the disease. The continuation of this trend is not only dangerous but makes it difficult to provide medical care for heart and neurological patients at the hospital.”

In Ardakan, a Parliament Deputy was quoted by ISNA as saying yesterday, “Ardakan faces a shortage of 160 hospital beds and 140 medical personnel.”