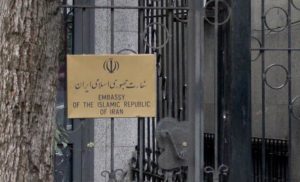 According to Albanian media outlets, including Top Channel TV, Vision Plus, Euronews, Fax News, and the Koha-Jone website, on October 17, 2020, the Albanian Ministry of Interior declared Ehsan Bidi as persona-non grata and ordered his expulsion. Bidi was immediately arrested and transferred to confinement. Euro news- Albania reported, “Another Iranian identified as Ehsan Bidi has been declared persona-non grata by the Albanian Ministry of Internal Affairs, based on an order signed by Minister Sander Lleshaj. Sources from the anti-terror division say that Ehsan Bidi worked for the Iranian secret services and against the MEK.” Bidi will be detained in a closed camp until another country agrees to accept him.

To cover up this fiasco and prevent other MOIS agents from becoming alarmed over a similar fate, Bidi and websites affiliated with the regime’s Intelligence Ministry churned out a series of lies at the behest of the MOIS, claiming that because the MEK wanted to kill Bidi, he had been transferred to a secure location by the Albanian government!

The notorious MOIS agent, Massoud Khodabandeh, who runs an MOIS affiliated website, Iran-interlink, wrote: “According to Albanian police, Mojahedin-e Khalq agents who have infiltrated the former members in Tirana have plotted to assassinate Ehsan Bidi. While the police are investigating to identify and arrest the infiltrator (the terrorist agent of the Mojahedin-e Khalq), Mr. Bidi has been transferred to a secure place under protection.” Subsequently, Bidi claimed, “According to the Albanian police, the Mojahedin conspired to kill me. The police have now transferred me to a safe place for my protection, and they say that they are now looking for an infiltrator among the defectors who wanted to kill me. I will be their guest until they can find the assassin infiltrator from the Mojahedin.” The next day, however, the Albanian media published the official order to detain and expel the MOIS agent, Bidi, once again exposing and discrediting the mullahs’ lies and fabrications.

Ehsan Bidi, who was first identified in a statement by the Security and Counterterrorism Commission of the National Council of Resistance of Iran, on December 2, 2013, had been living in a closed camp in Albania since August 2019 for offenses he had committed. In August, the relevant authorities in Albania allowed him to leave the country voluntarily, but the Greek police prevented him from entering Greece, and he was forced to return to Tirana.

It is worth noting that Bidi never came to Albania along with other MEK members. After surrendering to the Iraqi authorities in April 2013, he was under the control of the Quds Force and the MOIS in the Muhajer Hotel in Baghdad. The clerical regime compelled the United Nations Refugee Agency (UNHCR) to send Bidi to Albania as a refugee. At the time, the MEK and the NCRI protested the UNHCR decision in Baghdad, Tirana, and Geneva. Nevertheless, Bidi was sent to Albania to establish a point of contact for the espionage and terrorist missions against MEK. The Security and Counterterrorism Commission published a photo of his Iranian passport in a statement issued on December 3, 2013.

In August, Albania expelled another MOIS agent, Daniel Kasraei (with an Italian passport), who was spying on MEK under the guise of a journalist. This person had stayed at Ehsan Bidi’s residence for some time upon his arrival in Albania.

Gholamreza Shekari, another agent of the mullahs’ intelligence network in Albania and one of Bidi’s accomplices, is currently in custody for various offenses he had committed. He had been used extensively in the regime’s demonization campaigns against the MEK.

Given the regime’s terrorist plots in Albania and other European countries, the Iranian Resistance has consistently stressed the need to prosecute and expel intelligence and Quds Force agents and mercenaries.