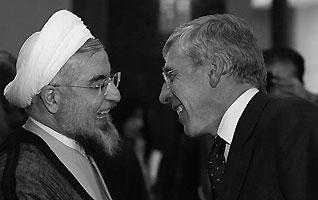 At a time when the people of Iran are suffering under the yoke of repression and the regime is secretly continuing its nuclear weapons projects and terrorist activities in Iraq, Palestine and Syria, the imminent trip to Tehran by former UK Foreign Secretary Jack Straw is a disgraceful act to appease the religious dictatorship.

At least 660 people have been executed in Iran in 2013, with two thirds taking place in the term of Hassan Rouhani.

The regime continues to carry out uranium enrichment and has completely disregarded the terms of its nuclear agreement with the P5+1, and yet it continues to call for the West to lift all sanctions.

Jack Straw, widely known in Iran as an apologist of the religious dictatorship, is damaging the reputation of Britain in the eyes of Iranian people through his trip to Iran and assistance to the mullahs’ regime. The UK government ought to stand with the millions of Iranians who seek freedom, justice and democracy.