Three days after the images of some of the hacked cameras in Evin Prison were published on social media, exposing only a glimpse of the painful and inhuman treatment of defenseless inmates by Khamenei’s henchmen, the regime’s head of Prison Organizations named Haj Mohammadi admitted that the images were real, but shamelessly apologized to Khamenei and the prison guards for the behavior and referred to the henchmen as “honorable prison guards.”

Accepting responsibility and the apology of a low-rank official is a futile attempt to shield Khamenei, Ebrahim Raisi, and the Judiciary Chief Gholam-Hossein Mohseni- Eje’i. Anyone who has experienced the mullahs’ prisons knows that these painful images are only a fraction of the brutal torture of more than half a million political prisoners over the past four decades, 120,000 of whom had been executed.

Mrs. Maryam Rajavi, the President-elect of the National Council of Resistance of Iran (NCRI), once again urged the United Nations Secretary-General, the UN human rights High Commissioner and the Human Rights Council, as well as the UN rapporteurs and international human rights organizations, to visit the Iranian regime’s prisons and meet with prisoners, especially political prisoners. Imprisonment in the Iranian regime has no meaning other than torture and murder, she said, adding: Prisoners should have the right to life, and their torture must be prohibited. They should have access to medical care, especially during the current Coronavirus outbreak, and should be released at least temporarily. She emphasized that the case of horrific and systematic human rights violations in Iran, especially the treatment of prisoners, should be referred to the UN Security Council. The leaders of the regime must be brought to justice for four decades of crimes against humanity.

Secretariat of the National Council of Resistance of Iran (NCRI)
August 24, 2021 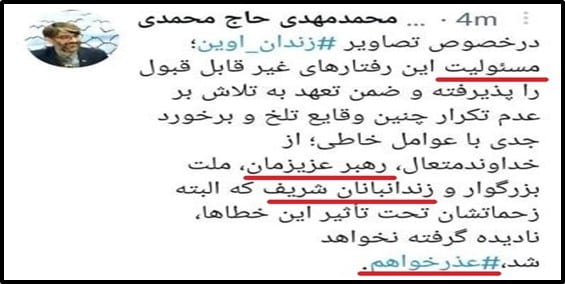