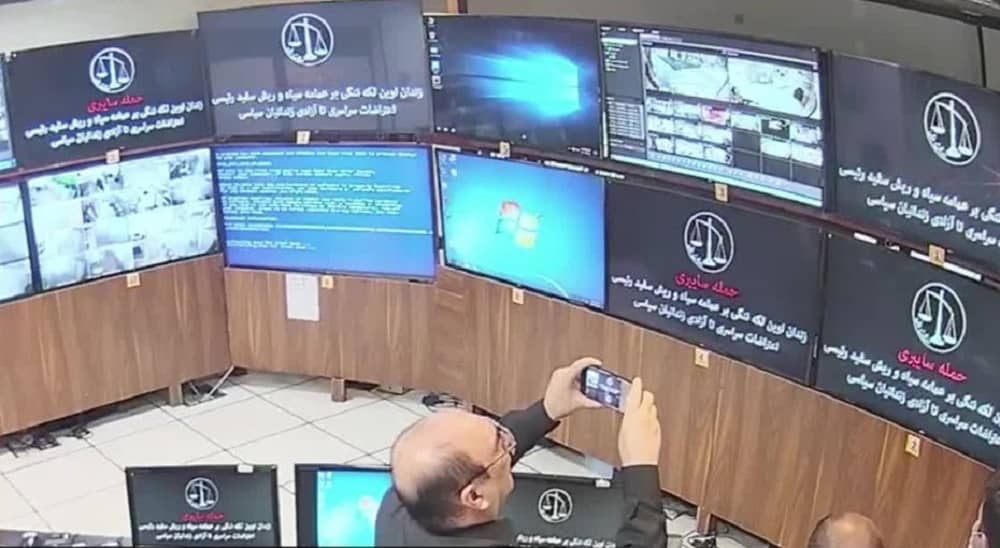 The Associated Press reported on Monday that it had received surveillance footage of Evin Prison from an anonymous hacking collective, along with a message explaining the intended purpose of the leak. Among the footage were images that showed guards in Evin’s control room reacting to the cyberattack through which the hackers obtained access to the facility’s cameras and computer data. According to the communications received by the AP, the hackers copied data that amounts to hundreds of gigabytes and sat on much of it for months before releasing large quantities to the media in the wake of Ebrahim Raisi’s swearing-in as the regime’s new president earlier this month.

The Evin footage was described as part of an effort to bring attention to grim prison conditions in Iran, especially for political prisoners. Raisi’s inauguration is in line with that goal because the human rights conditions would grow even worse under his administration. Raisi has a history of abuses including high-level participation in the massacre of 30,000 political prisoners during the summer of 1988.

The footage covers a period when Raisi was still in charge of the judiciary, before being confirmed as the regime’s president. He was designated as the regime’s top law enforcement official in 2018 by the mullahs’ Supreme Leader Ali Khamenei, then took office in March 2019. In November of that year, he was given a unique opportunity to compound his legacy of human rights abuses by overseeing key aspects of the crackdown on a nationwide uprising that broke out across nearly 200 cities and towns.

The crackdown entailed a new surge of political imprisonment, with at least 12,000 people being detained in the first weeks following the outbreak of unrest. A later report from Amnesty International made it clear that many of those arrestees were subjected to systematic torture over a period of months, as Raisi’s judiciary attempted to secure forced confessions and set the stage for politically motivated prosecutions, possibly on charges that carry the death penalty.

In keeping with his reputation as “henchman of 1988,” Raisi has long been a leading proponent of capital punishment, and as such, he oversaw an increased implementation of death sentences during the period in which he was judiciary chief, compared to an equivalent period in previous years. In 2019, at least 281 people were hanged, and in 2020 the number was at least 251. These statistics helped to maintain Iran, under the mullahs’ regime as the nation with the highest rate of executions per capita, and the current year is on track to further widen the gap between Iran and the next most prolific user of the death penalty.

During the first eight months of 2021, at least 220 prisoners have been executed, with more than 60 of these killings have taken place since Raisi’s “election.” The acceleration shows that Raisi’s influence over the repressive climate of the regime would only increase after his transition from the leadership of the judiciary to the leadership of the executive branch. Raisi’s replacement as judiciary chief, Gholamhossein Mohseni Ejei, has his own notorious legacy of human rights abuses, including involvement in the assassination of dissidents and intellectuals in the 1990s.

The Evin Prison data leak promises to be a source of new insight about the general condition of this and other facilities housing political prisoners, but it also promises to shine a light on how those conditions affect the course of coronavirus outbreaks at a time when Iran’s vaccination rate among the civilian population stands at only about four percent. Among the images shared by the Associated Press are those which show prisoners crammed into individual cells, without masks, and without prior quarantine procedures. Images of prisoners huddling under thin blankets underscore the fact that the cold and unhygienic conditions of Evin and similar facilities pose a risk to inmates’ health under normal conditions, let alone during a global pandemic.

Numerous specific examples of this risk have been highlighted by human rights defenders and Iranian activists in recent days. Last Wednesday, for instance, Iran Human Rights Monitor reported that a political prisoner by the name of Khaled Pirzadeh had tested positive for Covid-19 in Ahvaz’s Sheiban Prison, and had finally been moved to quarantine after being kept amongst other prisoners for days while showing symptoms.

The short period of time between Pirzadeh’s transfer and his infection raises questions about whether he was deliberately placed at risk as a form of punishment for his prior medical activism.

Forthcoming releases from the Evin Prison hack will most likely reveal conditions both before and during the pandemic, and while they may show that beatings, neglect, and other forms of mistreatment have escalated, they certainly show that human rights abuses are perennial features of Iranian prisons, especially in political wards.