• Deputy Minister of Health: If we are careless, the number of victims may reach two hundred and three hundred thousand
• Asr-e Iran daily: Coronavirus has produced more Iranian victims than the Iran-Iraq war, but it is silent, and this is where we are deceived. We have entered the second wave of Coronavirus, and more deaths are on the way, more than in military warfare
• Mrs. Maryam Rajavi: The loss of lives in these dimensions was preventable. The death toll in Iran is incomparable to other Middle Eastern countries. Khamenei and Rouhani are directly responsible for the growing number of victims and must be held to account 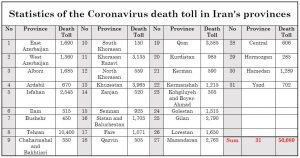 Iraj Harirchi, the regime’s Deputy Health Minister, told the state TV station Aflak in Khorramabad yesterday, “Let’s not think that the death toll of 5,000, eight or nine thousand, though each one of them is important, [is high], though if we are careless, unfortunately, [we will reach] figures of 10,000, 15,000 and God forbid the number may reach two or three hundred thousand.”

The number of victims is such that a state-run media outlet, Asr-e Iran, wrote yesterday, “Coronavirus is taking more casualties from the Iranian people than the war [with Iraq], but since it is silent, it is deceiving … They [the officials] have normalized all activities, and just to say that they have taken all precautions, they repeat emphasizing observance of ‘health protocols,’ as if these words will scare the Coronavirus! … We have entered the second wave of the Coronavirus, and more deaths are on the way, more than in a military war.”

In Tehran, Alireza Zali, head of the National Coronavirus Combat Taskforce (NCCT) told the state news agency, Mehr, yesterday, “The number of people with Coronavirus infection in Tehran has risen to 12 percent in the last 24 hours, growing by 2 percent compared to yesterday.”

In Kermanshah, according to ISNA today, the Governor described the second peak currently underway “worse than the first peak.”

According to Fars news agency yesterday, the spokesperson for Ahvaz Medical Sciences University in Khuzestan Province said 875 people had been infected in 24 hours, adding, “The total number of those infected has reached 19,081.” This is the highest number of infections in Khuzestan in 24 hours.

In Kerman, the president of the Medical Sciences University in Jiroft told the Tasnim news agency yesterday, “Health and medical care provisions in southern Kerman are inadequate. Since a month ago, the figure for those infected has increased. Yesterday, 67 more people tested positive in south Kerman.”

In Hormozgan, the state website Serat quoted the Governor as saying that hospitals’ ICU beds have reached capacity, adding, “Unfortunately, this has happened in Bandar Abbas.”

In Kurdistan, the president of the Medical Sciences University told Mehr news agency yesterday, “The trend of spread of Coronavirus in the entire Province, especially in Sanandaj and Qorveh, is extremely alarming. Sanandaj has entered a second peak of the virus, and the situation could be described as critical.”

Mrs. Maryam Rajavi, the President-elect of the National Council of Resistance of Iran (NCRI), reacting to the horrific and tragic number of fatalities, which has surged past 50,000, said: The catastrophe could have been prevented as was the loss of so many lives. The fatality figures in Iran, even the official figures, cannot be compared with other Middle East countries, whose economic and social infrastructures are far weaker than Iran. Mrs. Rajavi added: Khamenei and Rouhani are directly responsible for the increasing number of victims and must be held to account. Instead of paying the salaries of workers and hardworking people for a few months from the vast resources of the economic cartels controlled by Khamenei and the IRGC, they have sent the people of Iran back to work and to the Coronavirus altar of sacrifice.

Secretariat of the National Council of Resistance of Iran (NCRI)
June 7, 2020

Previous articleIran: Coronavirus Update, Over 50,000 Deaths, June 7, 2020
Next articleDistribution of Resistance Leadership Messages by Resistance Units and Supporters of the Mujahedin-E Khalq in Tehran and Various Cities in Iran