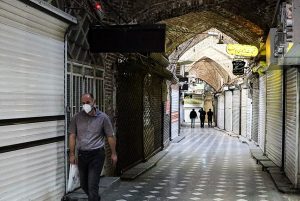 Regime officials’ admission and warnings about the deteriorating situation in Khuzestan, Lorestan, Chaharmahal and Bakhtiari, Kohgiluyeh-Boyer-Ahmad, Kermanshah, Sistan-Baluchestan, and Kerman

· Salaries of Workers and employees delayed for three months

Yesterday, Seyed-Razi Nouri, regime’s parliament deputy from Shush, told the IRGC affiliated news agency, Fars, “The virus spread in Khuzestan Province is acute. The number of people infected with the Coronavirus in the province stands at 434, which is a high number.”

According to state-run daily, Eqtesad-24, today, the regime’s Health Minister said, “We are witnessing an increase in COVID-19 infections in provinces such as Khuzestan, Lorestan, Chaharmahal and Bakhtiari, Kohgiluyeh and Boyer-Ahmad; provinces neighboring Khuzestan may face a Coronavirus outbreak.”

Today, the Health Ministry’s spokesman told the state-run PANA news agency, that Khuzestan Province “continues to be in red condition.” He pointed out, “We warn about an outbreak primarily in Lorestan Province, and then in Kermanshah and Sistan and Balouchestan provinces where we might face different conditions in the coming days.”

Seyed Mousa Khademi, the governor of Lorestan, told the state-run news agency, Tasnim yesterday, “Most of Lorestan cities are in the red or yellow state. We do not have any virus-free cities. Since April 20, the number of infected patients in the province has doubled, and in some areas by 2.5 to 2.6 times.”

The Dean of the University of Medical Sciences in Bam (Kerman), today told Tasnim, “Since roughly May 5, we have been witnessing a second wave of the pandemic in eastern parts of the province, with positive cases increasing compared with the past.”

Today, Alireza Zali, head of the National Coronavirus Combat Taskforce (NCCT) in Tehran, told the state official news agency Mehr, “Actually there is an increase in the number of ambulatory cases compared to hospitalized ones… In fact, following the reopening of certain activities, we are witnessing the increased movement of people in the cities, and this is worrisome… The situation would certainly turn to critical again… Reopening could be a warning sign for healthcare officials.”

All signs point to the intensifying dimensions of the virus catastrophe following the forcible return of the people to work such that the regime’s media and officials are now complaining. Dr. Massoud Mardani Specialist in infectious diseases, told Jahan-e San’at daily today, “We warned the government to postpone the reopening so that they would not regret it a month later.” The same day, Arman daily also quoted him as saying, “Disregard for health protocols will result in a more intense second and third wave of the virus …. Regrettably, health fell victim to the economy, which was given priority under these circumstances.”

Meanwhile, Mostaghel daily wrote today, “The formalistic reopening of schools means that if you go to school and get infected, don’t blame us because attending school is optional. Even if you do not go to school and face educational problems, again, it is not our business. We had just reopened the schools.”

Today, a Parliament deputy from Zahedan was quoted in Eghtesad Saramad as saying, “People in Sistan and Baluchestan Province are below the minimum food threshold. To make ends meet for their children, they must leave their homes. Thirty percent of the population does not have access to drinking water to abide by health protocols. What do we expect from a Province, where 75 percent of its population is below the poverty line and the minimum food threshold? What recommendation can one give?”

According to Arman daily, today, “Paying the wages of many workers and even the employees have been delayed for three months. Some have not even received their end of the year bonuses and benefits… More than 13,000 Coronavirus patients are hospitalized in social security hospitals.”

Previous articleCorruption in The Mullahs’ Regime Ruling Iran Part 4
Next articleLatest News in Brief – May 18, 2020

• Rouhani brazenly blamed the people for the next Coronavirus wave, saying that wherever the people obeyed, we could control it, and wherever the...
Read more
Statements

Iran: Targeting Three Repressive Centers in Khorasan in Response To the Execution of Three Baluch Compatriots